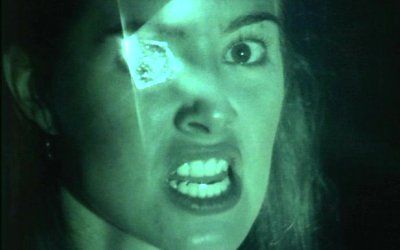 Every Halloween, it seems like The Boogeyman pops up somewhere on cable.  No, I’m not talking about that awful film that starred the oldest son from Seventh Heaven.  No, this Boogeyman was released way back in 1980 and it was directed by the infamous Ulli Lommel. 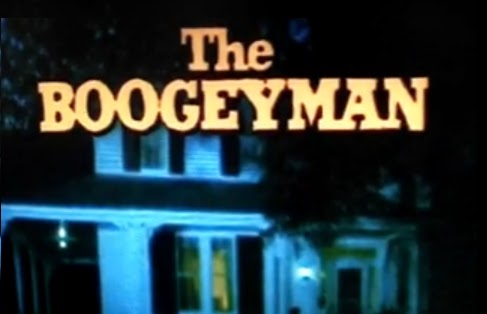 A hybrid of Halloween, the Exorcist, and probably every other horror film that had been released up to 1980, The Boogeyman opens up with siblings Willy and Lacey spying on their mother having sex with her creepy boyfriend who is wearing a nylon stocking over his face.  So, naturally, Willy grabs a butcher knife and stabs the man to death.  This act of violence is reflected in the bedroom mirror and, not surprisingly, this leads to the dead boyfriend’s evil spirit getting trapped in the mirror.  Or maybe it’s just the evil of the act itself.  Or maybe it’s … well, there’s a lot of possibilities and it’s hard not to consider them all because the film considers none of them, beyond the fact that the dead boyfriend is still in the mirror (which, let’s give credit where credit is due, is actually a pretty neat idea for a horror film).

Anyway, we jump forward 20 years and now, the brother and sister have grown up.  They both live on a farm with their judgmental, self-righteous, ballet-hating aunt and uncle.  (Okay, I’m projecting a little here because I have relatives who remind me of both of these characters and I always hated having to spend any time with them over the summer because I always knew they’d be all like, “Look at us, we’re  farm folk, we’re better than you and who needs books or ballet when you got foul-smelling chickens and cows that’ll kick you in the face just because they feel like it…”  Seriously.)  Willy (now played by Nicholas Love) has been mute since the day he brutally butchered his mother’s boyfriend and oddly enough, no one seems to be disturbed by the fact that he’s a murderer.  (“He’s a good boy,” his uncle says at one point, “I just wish he could talk.”)  Lacey (played by Suzanna Love) is married to Jake Scully (Ron James) and they have a son.  Judging from the uniform he’s wearing when he’s first introduced, Jake is apparently some sort of law enforcement guy.  He’s also a total and complete chauvinistic toadsucker who (though it’s never acknowledged in the film) is pretty much responsible for every terrible thing that’s about to happen.

Lacey is suffering from intense nightmares (the nightmare sequence, by the way, is one of the film’s genuinely disturbing moments) and she keeps waking everyone up at night with her screams.  Well, of course, Jake can’t have this because they’re farm folk, after all!  So, Jake has to act like a man about it and chastises Lacey for not suppressing her feelings.  When that doesn’t work, he drags her off to a therapist.  This would seem like a good idea except for the fact that the only therapist in their little rural community appears to be John Carradine.  Carradine grimaces through his three scenes, tells Lacey that she should go back to her childhood home and see that it’s just a normal house despite its history of brutal murder, and then leaves to collect his paycheck.

Lacey says she doesn’t want to go back to the house where the most Hellish thing ever occurred.  Jake tells her that she’s being silly and that she’s going to go relive the worst event of her life whether she wants to or not.  Seriously, Jake sucks.

So, Jake drags Lacey back to her childhood home.  The house is now inhabited by two teenage sisters and their obnoxious little brother who spends his time running around and screaming, “Boogeyman!” at random.  He’s kind of a brat but don’t worry – he eventually yells “Boogeyman!” one too many times and ends up getting his neck crushed by a falling window.  That scene, by the way, genuinely shocked me because you just don’t expect to see little kids dispatched so graphically.

But before the little boy gets killed, we get to watch Lacey and Jake wander through the house.  It turns out that, even though the house has changed owners, the exact same mirror is still hanging in the bedroom.  Lacey looks at the mirror, sees her mother’s dead boyfriend’s reflection, and proceeds to shatter the mirror into a hundred pieces.  Jake replies that she’s being silly and proceeds to put almost all the broken shards of the evil mirror into a paper bag so he can take them back to the farm with him.  Why?  Well, because he’s Jake so anything he does must be right…

Of course, by bringing the mirror to the farm (and then deciding to put it back together — really, Jake?), Jake has also brought the evil spirit of the dead boyfriend with him as well.  Once again, Jake sucks.  Though, in his defense, Lacey was having nightmares and Willy nearly strangled a neighbor girl, before John Carradine even suggested going to the house.  And mom’s dead boyfriend liked to wear a stocking over his head but was he really evil?  After all, he’s the one who ended up getting stabbed to death…well, regardless, now people start dying and eventually a priest has to come up to the house and try to remember the final scene of the Exorcist.  So, thanks a lot, Jake!

The Boogeyman is one of those odd films that always seems to pop up on TV and hidden away in various DVD horror compilations.  Through no fault of my own, I’ve actually seen it a handful of times and every time, I’ve discovered something else that doesn’t really work.  The last time I watched it, I found myself concentrating on just how unconvincing all the actors (with the exception of Suzanna and Nicholas Love) were.  Slowly but surely, I found myself growing obsessed with actor Ron James, who played Lacey’s husband with all the style and charisma of a cardboard cut-out.  (Of course, it doesn’t help that James was playing a character who, to put it charitably, is kind of a sexist pig.  “C’mon, Lacey, cheer up!” he says as he forces her to visit the house where the most traumatic event of her childhood occurred.)  Whenever the movie hit one of its many slow spots, I asked myself, “I wonder if Ron James gave up during the first day of shooting or the second?”

And yet, oddly, this is a film that’s stuck with me.  The film has an effectively Southern gothic atmosphere to it and even the stiff performances and unnatural dialogue help to give the film a certain dream-like atmosphere.  I know quite a few people who argue that Ulli Lommel is the worst director of all time but he actually comes up with some effectively surreal and disturbing images.  The sight of the dead boyfriend, with a nylon stocking pulled down of her face, suddenly staring at Lacey from the mirror is genuinely frightening, as is Lacey’s nightmare in which she’s bound and gagged by a knife-wielding assailant.  The idea of mirrors storing everything that they witness is an intriguing one and there’s a nicely surreal sequence in which poor, mute Willy paints over every reflective surface he can find.  Whether by intentional design or not, these flashes of genuine fright and oddness are all the more effective because they’re surrounded by such mundane material.  The end result is a film that’s either brilliant or terrible depending on which point you actually start watching it.