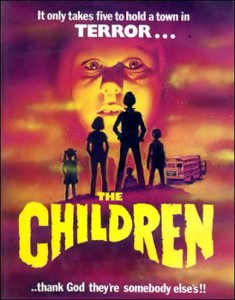 Let’s just be honest: Children are scary.  Especially when they’re evil killer children with black fingernails who can scald you to death with a hug.  “Oh, Lisa,” you’re saying, “there aren’t any children like that!”

The small town of Ravensbrook is a great place to live.  The scenery is green and pretty.  The people are affluent and, for the most part, pleasant.  The sheriff does his best to maintain the law and his deputy is usually too busy fooling around with the farmer’s daughter to issue any speeding tickets.  There’s less than a dozen children in the town but they’re all cute, nice, and happy.  It’s a nice little town …. with the exception of the gigantic chemical plant that happens to be sitting off in the distance.

Yes, that chemical plant is kind of a problem.  As the film begins, one of the pipes breaks and a gigantic yellow toxic cloud is released into the air just in time for the local school bus to drive through it.  It’s never really made clear just what exact chemicals are in that yellow cloud but they sure must be powerful because, instantly, all the children on the bus are transformed into a bloodless zombies with black fingernails, perpetual smiles, and the ability to microwave anything they touch.  The children quickly burn their kindly driver to a cinder, abandon the bus, and then start to head back home on foot.

Eventually, the abandoned bus is discovered and a search is launched for the “missing” children.  However, as the search only turns up the remains of parents burned to a crisp, the sheriff comes to realize that maybe something weird is happening with the children.  Now, he’s faced with the task of convincing kindly adults not to accept hugs while the children slowly and methodically kill everyone in town.

That plot description probably makes The Children sound pretty silly but actually, it’s a surprisingly effective B-movie.  The acting is pretty uneven but the children are undeniably creepy and this is one of those rare horror films where even the people who you naturally assume are safe end up getting burned up.  The film’s finale — with the children laying seige to a farmhouse populated with the few surviving townspeople — is surprisingly effective and even the surprise ending — while silly and predictable — is also oddly disturbing.

Incidentally, the best way to watch the film on DVD is to watch it while listening to director Carlton Albright’s commentary.  Quite rightfully (and as opposed to a lot of other horror filmmakers), Albright never apologizes for making a exploitation film and instead provides a lot of insight into what it’s like to make a low-budget horror film. 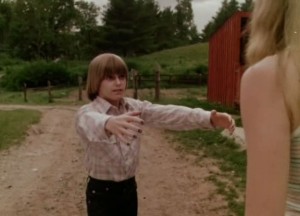 1 thought on “The Children (reviewed by Lisa Marie Bowman)”