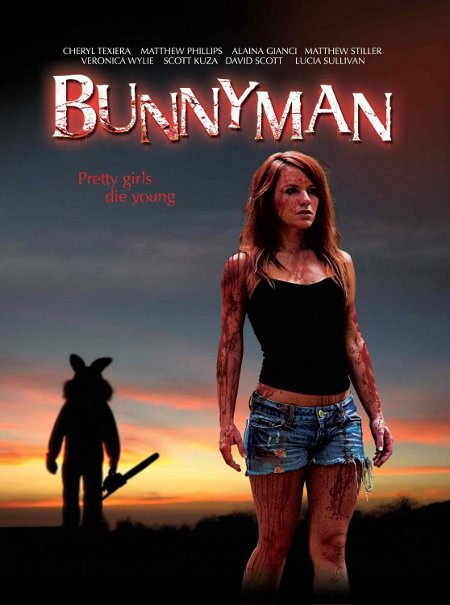 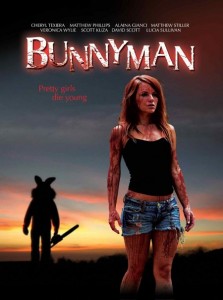 It seems like almost every holiday has inspired at least one horror film.  There’s been a host of films about killer Santas, there’s the Halloween films, and who could possibly forget Valentine?  Even Thanksgiving inspired Eli Roth to make a fake trailer for Grindhouse.

But what about Easter?

Me and my BFF Evelyn were discussing this earlier this week.  Though both of us know our horror history, neither one of us could think of one horror film that takes place on Easter.  Finally, we both agree that the Easter Bunny just isn’t scary enough to inspire a horror film.  Santa Claus, after all, punishes boys and girls who haven’t been nice while the Tooth Fairy is just a paranormal dentist.  But the Easter Bunny…nobody could possibly be scared of the Easter Bunny, right?

Well, it would appear that director Carl Lindbergh disagreed with both me and Evelyn and he set out to prove it by making a movie.

Ladies and gentleman, just in time for Easter, it’s Bunnyman!

As Bunnyman begins, we meet six young morons who are driving through the countryside.  We never find out why they were all together or where exactly they were driving to but, before we can spend too much time worrying about that, they’re suddenly being chased by a mysterious truck which forces them off the road and causes them to crash and get stuck.  One of the six morons gets out of the car and starts to trying to fix it.  (I’m using the term “moron” because — though the end credits claim that all of these characters have individual names — nobody uses them during the actual movie.  Instead, they communicate mostly by going, “Hey you!’ and “Let’s go!” and “Run!”)  While the mechanic moron is under the car, the truck comes driving up again and rams the car, killing mechanic moron.  The surviving morons get out of the car and spend the rest of the movie running through the woods.  Pursuing them is the driver of the truck who is carrying a chainsaw and dressed like the Easter bunny.

And that’s pretty much the entire film.  Oh sure, the morons run into a few random country folks, the majority of whom tell them to go away.  On this note, I do have to give the movie credit.  I may be a city girl now but I grew up in the country and I can tell you that, if there was anything that we weren’t going to mess with, it would have been a man carrying a chainsaw while dressed up like the Easter bunny.

As always happens in these unfortunate situations, some of the morons die in the wilderness and then some more die when they stumble into Bunnyman’s cabin.  Bunnyman, by the way, lives with a hunchback and likes to perform amueter surgery while listening to classical music.

Bunnyman might not sound like much and, to be honest, it’s a pretty bad movie that only occasionally manages to be so bad that it’s good.   The writing is terrible and the acting is worst and director Lindbergh tells his story with absolutely no sense of pace or subtext.  (Seriously, there’s one scene where the morons talk to a redneck and that scene seems to go on for about 3 hours.  It’s a bit like some sort of odd MK-Ultra endurance test.)  The film also has a very strange sound mix.  Sometimes, the movie is way too loud and then other times, you can’t hear a thing.

However, with all that said, Bunnyman is also literally your only chance to see a man in an Easter bunny costume chasing a bunch of morons with a chainsaw.

That has to be worth something.

Supposedly, Bunnyman is based on an actual urban legend from Virginia and, according to the legend’s wikipedia page entry, the legend is actually pretty close to the film.  To which I have to say “Really?  A bunny costume?”  Then again, I’m from the southwest, the home of La Llorona, Goatman, and the Chupacabra so maybe I should just let sleeping bunnymen lie. 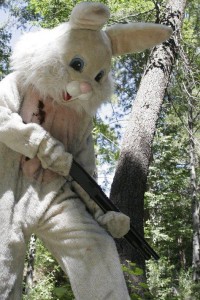