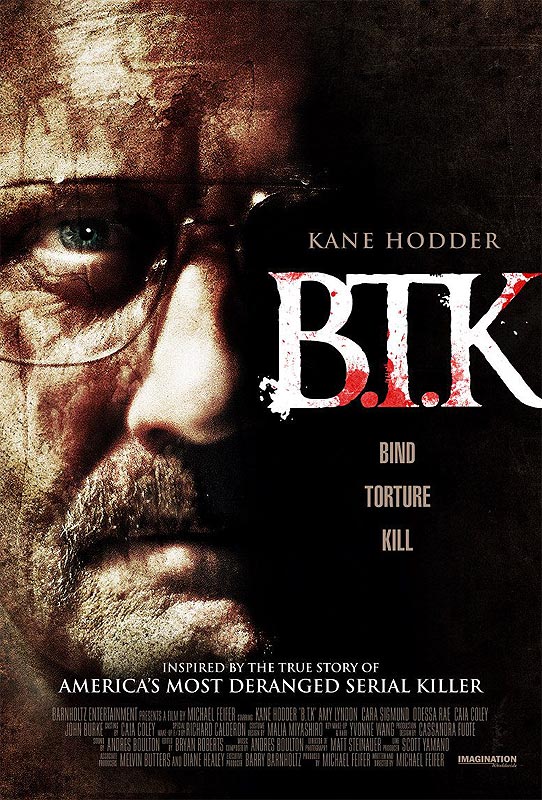 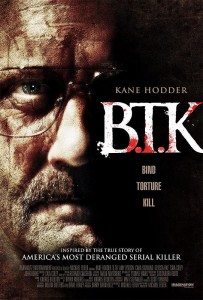 One of the unfortunate things about being a self-appointed “film critic” is that the majority of the films that have been released over the past century are neither good nor bad.  Instead, they’re simply “bleh.”  Neither good enough to be memorable nor bad enough to be truly entertaining, a Bleh film sits in the gray area between good and bad.  These are the films that you watch and maybe if you’re in the right mood or you’re watching with the right audience, you’ll find the experience of watching the film tolerable.  And if you’re not in the right mood, you’ll end up bored and will probably start to forget about the film before the end credits even roll.  When you make it a point to see (and review) as many films as you possibly can, the end result is that, in between the joy of discovering some really great examples of cinematic art, you end up sitting through a lot of Bleh films.

The 2008 horror film BTK is the epitome of a Bleh film.

Like many direct-to-DVD horror films, BTK is based on a true-life case of serial murder.  Dennis Rader was an animal control officer living in the suburbs of Wichita, Kansas.  He was also a prominent member of the local church and, by most accounts, a devoted family man and father of two.  He was also a remorseless serial killer who, over two decades, killed at least 10 people.  His oldest victim was 62.  His youngest was 9.  When he wasn’t murdering, Rader was writing taunting letters to the police in which he named himself the “BTK,” for Bind Torture Kill.

What makes Rader’s crimes even more disturbing is that he nearly got away with them.  It wasn’t until 13 years after his last confirmed murder that Rader was arrested and confessed to being the BTK killer.  When Rader appeared in court for setencing, he again gave the details of all ten of his admitted murders and, for a few weeks afterward, it was next to impossible to turn on a TV without seeing the footage of this mild, middle-aged men calmly explaining how he killed ten people.  I was 19 at the time and I can tell you that I had more than a few nightmares as a result of Dennis Rader.

A lot of great horror films have been based on the concept of the killer next door but unfortunately, BTK, though competently directed by Michael Feifer, is not one of them.  Offering up a highly fictionalized account of Rader’s crimes, BTK is pretty much a typical psycho film that uses its true life origins to hide the fact that there’s not really much going on.  Playing the title role, Kane Hodder (of Friday the 13th fame) is menacing and effective when the film calls on him to be evil BTK but he’s far less effective when it comes to recreating the mask of normalcy that Rader used when dealing with his friends and his neighbors.

The reason why the real-life Dennis Rader was such a frightening and disturbing figure was because he seemed so normal and ordinary.  The fear that he inspires comes not from his crimes but from the fact that if Dennis Rader could have been a serial killer than just about anybody could be.

That’s a genuinely scary idea that the cinematic BTK never seems to grasp.