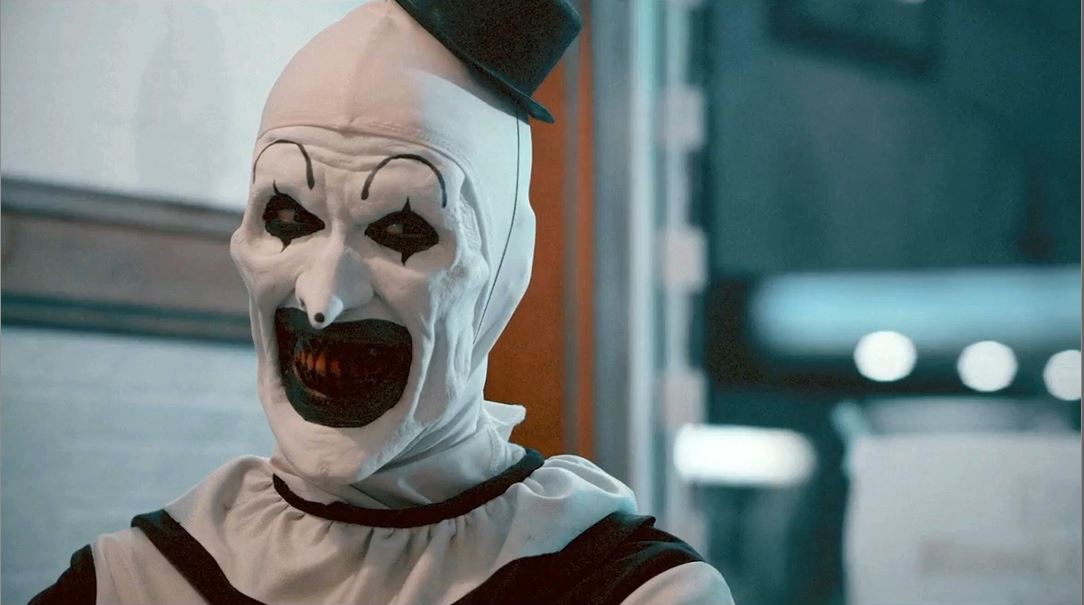 Are you scared of clowns?

I’ve never really had much of a problem with clowns, beyond the fact that some of them really do need to learn how apply lipstick without getting it all over their face. That said, I recently watched the 2016 horror film, Terrifier, on Netflix and I now totally understand why some of my friends are totally terrified of the grinning men in the white makeup. I mean, I will send a Pennywise GIF to my clownphobic friends without even worrying about what damage I may or may not be doing to their mental well-being but I can guarantee you right now that I will never send any of them a picture of Art the Clown.

Art (who is played by David Howard Thornton) is the clown at the center of Terrifier and, as you can tell from looking at the picture above, he’s not exactly a clown that you want to meet in the middle of the night. Unfortunately, over the course of the film, several innocent people do just that. There’s the homeless woman who meets him in an abandoned building. There’s the two drunk girls who, after leaving a Halloween party, make the mistake of laughing at Art. There’s the owner of the pizzeria who makes the mistake of kicking Art out of his establishment. Art, it turns out, doesn’t deal well with rejection. It also turns out that Art can turn just about anything into a deadly weapon. (We also later learn that Art just happens to have a chainsaw. Agck!)

Art doesn’t speak. We never learn where Art came from and why he insists on killing everyone that he meets. This lack of motivation makes Art a very scary clown indeed. We can only assume that he kills because he’s evil and, being a creature of pure evil, there’s really no way to reason with him or to rationalize his actions. Art is pure chaos released into the world and, as a result, he’s terrifying. If nothing else, Terrifier is a film that lives up to its name.

Director Damien Leone made Terrifier with a budget of a $100,000 and he uses that low budget to his advantage. The deserted building where Art stalks the majority of his victims is a genuinely atmospheric location and, even if they were done cheaply, the gore effects are disturbingly nightmarish. Fortunately, Leone gets some good performances from his cast, which makes the film all the more frightening. David Howard Thornton has enough presence to make Art the Clown intimidating, even when he’s just standing still and staring at nothing. As the film’s “final girl,” Samantha Scaffidi gives a likable and relatable performance. Wisely, the film neither turns her into a super warrior nor a simpering fool. Instead, she’s just a normal person trying to survive the night, much like those of us watching the film in what we hope is the safety of our own home.

Terrifier is an effectively scary little slasher film. It’s not for everyone, of course. It’s a film for horror fans and it has little interest in reaching out to people who don’t normally enjoy the genre. The violence is brutal and the film doesn’t shy away from gore. Those of you who easily fall prey to nightmares may want to stay away. As for those of you who are scared of clowns …. well, Terrifier will prove the correctness of your phobia. Seriously, if clowns scare you, don’t watch this movie. It’ll be safer for you just to watch It again….