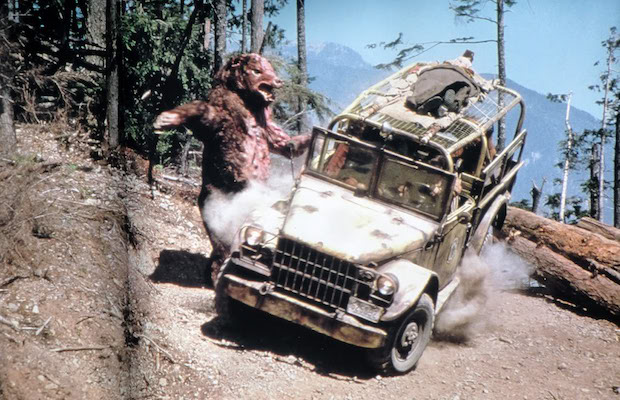 First released way back in 1979, Prophecy is one of those films where a big evil corporation is selfishly polluting the environment and a group of noble Native Americans is convinced that a vengeful spirit of the forest has been awakened as a result.

We’re told that the vengeful spirit is named Katahdin and that it’s “as large as a dragon and has the eyes of a cat.” We’re also told, by someone who claims to have actually seen it, that the Katahdin is a combination of several different creatures, “a part of everything that is God’s creation.”

Well, it is until the bear itself actually shows up on screen. That’s when we find ourselves confronted with this:

And here’s another look at him:

I mean, don’t get me wrong. He certainly is ugly. But he just looks so silly and …. well, fake.

The lesson here, and it’s an important one, is that you should never put your monster onscreen unless it can actually live up to all the hype. Take a lesson from Spielberg. When it became obvious that the shark in Jaws looked like a tin model, Spielberg made the decision to not show the shark. Instead, he gave us a lot of point of view shots and, by the time the shark did appear, audiences were so frightened that it didn’t matter whether it looked convincing or not. Prophecy makes the mistake of having its monster all over the place and it just doesn’t work.

Of course, once the EPA’s Dr. Robert Verne (Robert Foxworth) shows up with his pregnant wife (Talia Shire, who somehow went from The Godfather and Rocky to this), he discovers that one reason why the Katahdinh doesn’t live up to all the hype is because it’s just a mutant bear. It turns out that all that pollution led to some crazy results and now every logger, Native American activist, and camper in the area is in danger! Can Dr. Verne and a team of disposable, forgettable characters end the threat of Katahdinh!?

Prophecy is a big, dumb movie that’s never as much fun as you want it to be. There is one early scene that features a camper trying to hop away from Katahdinah while zipped up in a sleeping bag. That scene — which ends with one ruined sleeping back and lot of feathers floating around — is just demented enough to be kind of fun:

Otherwise, the entire film is slow-moving and rather dull. Part of the problem is that it was directed by John Frankenheimer, a major and important filmmaker who had entirely the wrong sensibility for this film. Frankenheimer was a legitimately great director (among his good credits: The Manchurian Candidate, Birdman of Alcatraz, Ronin, Seconds) but he takes the material too seriously. He spends so much time trying to sell the film’s environmental message that he forgets that the majority of the audience for a film like this isn’t watching because they want to become a better person. They’re watching for mutant bear mayhem! This is the type of film that needed to be directed by someone from the Roger Corman school of quick thrills and shameless shlock.

So, here are the twin lessons of Prophecy: know your audience and make sure your monster can live up to its reputation! Otherwise, you’ll just be known for that one scene with the exploding sleeping bag.