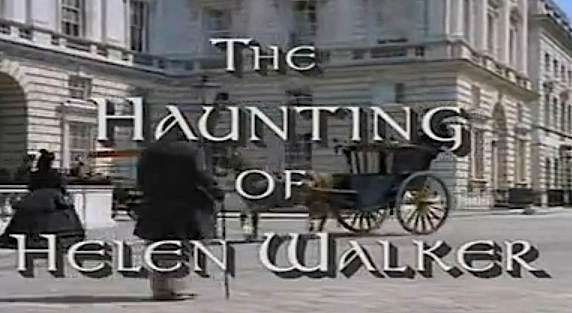 Stop me if this sounds familiar.

In Victorian-era England, a somewhat neurotic young woman is hired to serve as the governess for two children who live in a foreboding estate. Once the governess arrives, she discovers that the children — especially little Miles — can be a handful. She also discovers that there was a governess hired before her, a governess who died under mysterious circumstances. At night, the new governess hears strange noises and soon, she becomes convinced that she’s seen the ghosts of both her predecessor and the old governess’s lover, Peter Quint. Everyone else may think that the new governess has allowed the isolation of the estate to get to her but she’s convinced that the ghosts have possessed the children! She becomes determined to save the children, even at the risk of their own lives….

Still, if you can accept the changes to the source material, The Haunting of Helen Walker is an entertaining and atmospheric ghost story. Director Tom McLoughlin doesn’t waste any time getting to the action and Christopher Guard makes for an appropriately brooding and dangerous Peter Quint. At first, it’s a bit jarring to hear Valerie Bertenelli’s American accent in what is essentially the epitome of a British ghost story but she gets better as the film progresses and she does an especially good job during the film’s dramatic climax. Finally, Diana Rigg does a great job playing the estate’s intimidating housekeeper, Mrs. Grose. She’s skeptical of Helen from the minute she arrives and the fact that Helen says she can see ghosts doesn’t do much to improve Mrs. Grose’s opinion.

In the end, this is an entertaining, if hardly definitive, take on Henry James’s novella. Having been made for 90s television, it actually has to be rather restrained in its shocks but that actually works to the film’s advantage, forcing the movie to rely on atmosphere over jump scares. The Haunting of Helen Walker is currently on YouTube and it’s fine viewing for a rainy night.