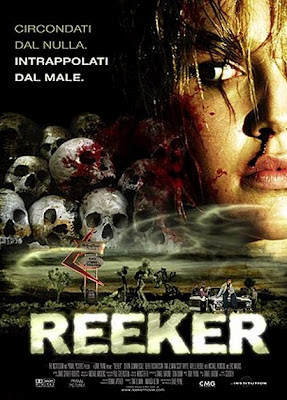 Strange things happen in the desert.

For instance, at the start of this 2005 film, a family is driving across the desert when they hit a deer.  The father gets out of the car to check on the situation, which leads to the family dog getting out.  The father goes chasing after the dog.  When he eventually returns, he’s missing half of his face….

Meanwhile, five friends are driving across the desert, heading for a rave.  Nelson (Derek Richardson) and Cookie (Arielle Kebbel) are falling in love.  So are Jack (Devon Gummersall) and Gretchen (Tina Illman).  Meanwhile, Trip (Scott Whyte) is freaking out because, earlier, he ripped off the friendly neighborhood drug dealer, Radford (Eric Mabius).  Trip is worried that Radford is going to come after him.  Everyone else is so annoyed with Trip that they barely even notice an overturned car sitting out in the middle of the desert.

Finally deciding that she’s had enough of Trip, Gretchen pulls over to the side of the road and orders Trip to get out of her car.  However, right after Trip gets out of the car, there’s a sudden tremor.  The whole world seems to shake.  When Gretchen reluctantly agrees to take Trip to a nearby diner so that he can get a ride home, everyone is shocked to discover that the diner is deserted.  For that matter, so is a nearby motel.  Everyone’s phone is dead too.  When their car suddenly stops working, the group decides to spend the night at the motel.

Eventually, they do discover that they’re not totally along. There’s a dazed man named Henry (Michael Ironside), who says that he’s searching for his wife.  There’s the legless man who jumps out of a dumpster and scurries off.  Even more alarming, for Trip, is the fact that he keeps seeing Radford standing in random places!  Beyond all that, there’s the shadow that seems to be determined to kill all of them, one-by-one.

There’s a big twist that explains why the hotel is deserted and why so many strange things are happening.  It must be said that it’s kind of a familiar twist but the film still sets it up well and, even if you’ve figured it out beforehand, it’s still a lot of fun to see how every strange thing that’s happened links back up to that twist.  Director David Payne makes great use of the dilapidated hotel and, for the most part, the cast does a good job with their thinly-drawn characters.  Not surprisingly, my favorite performance came from Michael Ironside, who is a pro when it comes to movies like this.  I also liked the performances of Scott Whyte and Eric Mabius, both of whom brought some unexpected shadings to their characters.  Reeker is an entertaining little horror film, one that does a good job of using the typical slasher tropes to tell an interesting story.