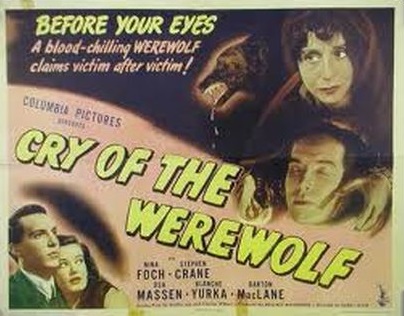 Running an occult museum can be dangerous business, especially when the museum happens to be housed in the former home of a notorious gypsy queen.

That seems to be the main theme of this 1944 movie, in which Prof. Charles Morris (Fritz Leiber) is mysteriously murdered almost immediately after announcing that he’s found evidence that the legendary gypsy queen, Marie La Tour, was also a werewolf.  Apparently, he was mauled by some sort of wolf but how could a wolf have gotten into his office?

That’s the question that has to be answered by his son (Stephen Crane), his secretary (Osa Massen), and the local police detective (Barton MacLane).  The son and the secretary think that Prof, Morris may have been killed by a werewolf.  The detective thinks that it was the professor’s handyman, or at least he does until that handyman turns up dead and, once again, mauled by a wolf.  The film tries to keep us guessing as to whether it was a human or a werewolf who killed the professor but all we have to do is look at the film’s title and we’ve got the answer.

Cry of the Werewolf is a low-budget, black-and-white affair that clocks in with a running time of 63 minutes, making it feel more like an extended episode of an old anthology series than an actual movie.  Unfortunately, it doesn’t have much atmosphere or many scares but it does feature a good performance Nina Foch, who plays a mysterious woman who might hold the key for solving the mystery.  (Foch later went on to a film career of some note.  If you’ve ever watched The Ten Commandments on Easter, she played the Egyptian princess who adopted and raised Moses.)  For the most part, this movie is for fans of old B-movies and maybe people who are curious to see a version of the werewolf legend that doesn’t involve Lon Chaney, Jr.