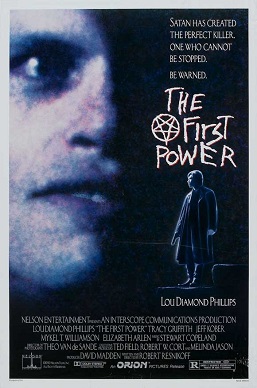 In this 1990 horror film, Lou Diamond Phillips plays Russell Logan, a Los Angeles police detective who specializes in capturing and sometimes killing serial killers.  (“So far,” a news reporter breathlessly tells us, “Detective Logan has captured or killed three serial killers!”)  His latest triumph is the capture of Patrick Channing (Jeff Kober), also known as the Pentagram Killer because he carves a pentagram on his victims.

Logan captures Channing thanks to a tip from a psychic named Tess (Tracy Griffith).  Tess specifically made Logan promise her that he wouldn’t push for Channing to get the death penalty.  However, after Logan captures him, he goes back on his word and Channing is sentenced to die in the gas chamber.  To be honest, I wasn’t aware that detectives had the power to decide whether or not to go for the death penalty when it comes to prosecuting murder cases.  As far as I’ve known, that’s always been the job of the district attorney’s office.  Maybe they do things differently out in California….

Anyway, Channing smiles when he’s sentenced to death and then he smiles again when he’s executed.  Logan shrugs all of that off but suddenly, the pentagram murders start up again.  The murderer is killing people in the exact same way that Channing did and he also appears to be targeting the people who were involved in Channing’s capture.  Meanwhile, Tess is running around angry because she specifically told Logan not to allow Channing to be executed.

Hmmmm …. have you figured out what’s going on, yet?

Of course you have!  That’s because you’ve seen a horror movie before.  From the minute that Channing was sentenced to die, you probably knew that Channing would eventually come back from the dead and start murdering people all over again.  It turns out that, by executing Channing, the state of California has granted him the first power, i.e. resurrection.  By committing more murders, Channing is hoping to unlock all of the other powers.  Those powers include the power to appear and disappear at will, possess other people, jump off of roof tops, and mockingly laugh at anyone who tries to stop him.

Apparently, Detective Logan is not a fan of horror movies because it takes him a while to figure all of this out.  (We should keep in mind that he’s a cop so his job is to be skeptical of claims of people returning from the dead.)  But once he starts hearing Channing’s disembodied voice and getting attacked by possessed priests and homeless women, he really has no other option but to accept the truth and work with Tess to try to end Channing’s reign of terror.

The First Power is one of those horror films that’s extremely predictable but effective nonetheless.  Lou Diamond Phillips manages to maintain a straight face, regardless of how outlandish this film gets and Jeff Kober seems to be having a blast as the flamboyantly evil Patrick Channing.  Channing jumps off of rooftops and through windows with a graceful aplomb and the film actually has some fun with the idea of Channing skipping from body to body.  The First Power is often dumb but always entertaining.