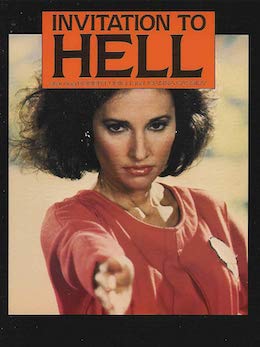 There’s one rule in life that should never be forgotten.

Any movie that opens with Susan Lucci casting a hex that causes a man’s head to explode is going to be worth watching.

That’s certainly the case with Invitation to Hell, a 1984 made-for-TV movie that casts Lucci as Jessica Jones, an insurance agent who lives and works in an upper class suburb in Southern California. Jessica not only sells insurance but she also runs the ultra-exclusive Steaming Springs Country Club! Anyone who is anyone in town is a member of Steaming Springs! Of course, joining Steaming Springs requires going through a strange ceremony in which you walk into a mist-filled room. Jessica says that the room is called “the Spring” and that it contains everything that someone would need to be happy. However, one need only consider that the film is called Invitation to Hell to guess that Jessica might not be completely honest.

Matt Winslow (Robert Urich) and his family have just moved into the suburbs. Matt’s an engineer whose job involves designing a state-of-the-art space suit. Matt is a little bit annoyed when Jessica starts pressuring him and his family to join the country club. He’s even more perturbed when his wife (Joanna Cassidy), upon returning from the mist-filled room, starts acting and dressing just like Jessica. Matt soon comes to suspect that something strange might be happening, especially after his own daughter attacks him! Fortunately, Matt’s spacesuit comes with a flame thrower, a laser, and a built-in computer that can determine whether or not someone is actually a human being. (Wearing the space helmet means viewing the world like you’re the Terminator.) Soon, it’s science vs. magic as Matt dons the suit and tries to rescue his family from country club living!

Invitation to Hell is totally ludicrous but also a lot of fun. Robert Urich is properly stolid as the hero while the film itself is, not surprisingly, stolen by Susan Lucci. Lucci is totally and wonderfully over-the-top as Jessica, playing the role with the same cheerfully unapologetic intensity that made her a daytime television star. This is a film that has a little bit for everyone — familiar television actors, flamethrowers, space suits, demonic possession, exploding cars, and even a little bit of social satire as the film suggests that living in the suburbs is a terror even without weird country clubs and chic spell casters.

Interestingly enough, this made-for-television film was directed by none other than Wes Craven! The same year that this film was broadcast, Craven directed a little film called A Nightmare on Elm Street. While Invitation to Hell might not be in the same league as that classic shocker, it’s still an enjoyably campy horror flick.

1 thought on “Invitation to Hell (reviewed by Lisa Marie Bowman)”