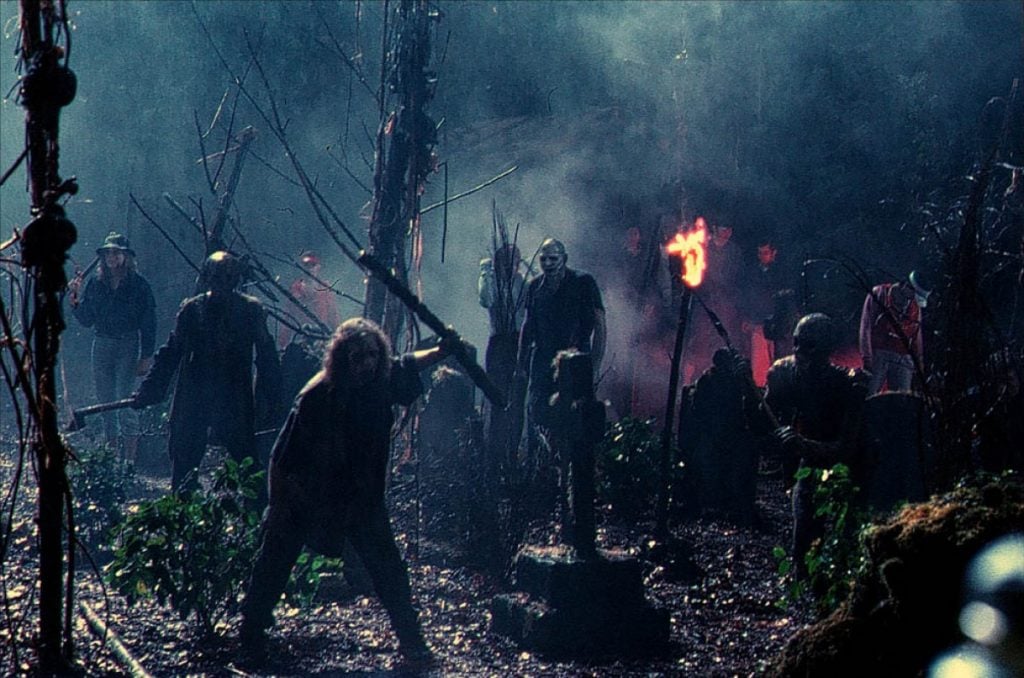 You know things are going to be bad when the 2003 video game adaptation House of the Dead opens with a lengthy narration in which we’re told exactly who is going to die in the film and who is going to live. Narration is usually a bad sign, in general. Narration that gives away a huge chunk of the plot during the opening five minutes is even worse.

Things get worse when we’re told that a bunch of college students need to find a boat so that they can attend the “rave of the century,” which is being held on an isolated island. (The island, by the way, is known as the Island of the Dead but no one seems to be that concerned by the name.) From what we see of the greatest rave of all time, it apparently involves one stage, two speakers, and exactly 8 people dancing. The dancers are often shot in slow motion, which I guess is meant to make them look like they’re having more fun than they actually are. Myself, I’m wondering why anyone would hold the “rave of the century” on an island that no one can find. According to the banner above the stage, the whole thing is being sponsored by Sega, the company behind the House of the Dead video game that gave this movie its name.

Things quickly go downhill once the zombies show up and start killing everyone. It doesn’t take long for most of the disposable characters to get killed. The majority of the film is made up of people either running through the forest or hiding in a house or a boat. Because none of the characters really have any personality, you’re never quite sure who anyone is. Their deaths don’t really register because it never seems as if they were living to begin with. Watching the film, it’s hard not to feel that everyone on the island is a member of the living dead. It’s just that some of them haven’t realized it yet.

As mentioned above, House of the Dead is based on a video game and, frequently, the action is punctuated with heavily pixelated scenes that have been lifted straight from the game. On the one hand, you have to admire the film for being honest about what it is. On the other hand, you have to regret that the film itself is never as much fun as the game probably is.

House of the Dead was one of several video game adaptations that German director Uwe Boll was responsible for in the early aughts. Up until he retired from the film industry, it was regularly argued by online film critics that Boll was the world’s worst director. Boll responded to the criticism by challenging his most vehement critics to a boxing match. A few of the critics accepted the challenge and Boll actually did fight them, knocking all of them out. I imagine that’s probably every filmmaker’s secret fantasy.

Myself, I will say that I don’t think Boll is the worst director in the world. He’s not particularly good but there are worst directors out there. That said, House of the Dead is pretty bad. The dialogue is leaden, the characters are bland, and even the intentional attempts at humor fall flat. Seventeen years after it was first released, it still pretty much represents the nadir of video game adaptations.

Anyway, the main lesson of this film is …. well, I don’t think there really is a lesson to be found, other than that it might be a good idea to take names seriously. I mean, Island of the Dead? Can anyone really be surprised that the zombies showed up?