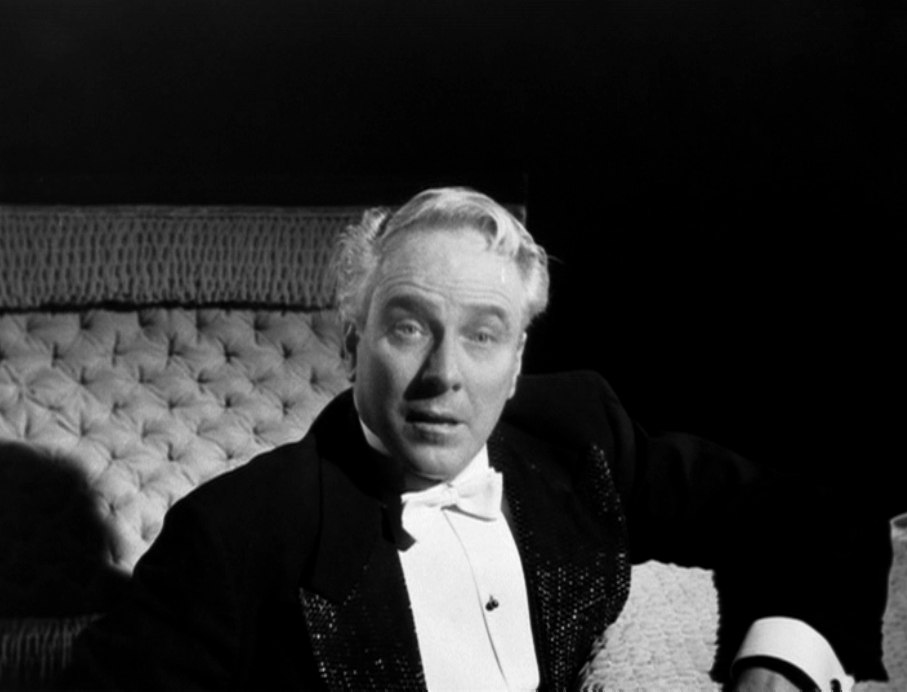 From the one and only Edward D. Wood, Jr. …. it’s Night of the Ghouls!

Night of the Ghouls begins with Criswell, the “psychic” who also provided the introduction for Wood’s best known film, Plan 9 From Outer Space, sitting up in a coffin and telling us that we’re about to see a film about the dead and the problems of everyday Americans. This is followed by one of Wood’s trademark stock footage montages. Cars crash. Teenagers fight. Drunken bums stare at the camera. It’s a scary world out there!

And it’s about to get scarier. The police have received reports that a deserted old mansion that was previously destroyed by lightning has been rebuilt! Lt. Dan Bradford (Duke Moore) is assigned to investigate the case with the help of cowardly Patrolman Kelton (Paul Marco). Bradford was called away from the opera so he wanders through the entire film in a tuxedo. Apparently, this case is so important that he couldn’t even change clothes before investigating.

Anyway, it turns out that the house has been rebuilt by Dr. Acula (Kenne Duncan), who wears a turban and claims that he can speak to the dead. Acula lives in the house with his silent and scarred assistant, Lobo (Tor Johnson). A typical Dr. Acula seance involves a floating trumpet playing off-key, several skeletons sitting at a table, and a mysterious woman in white. Acula says that the house is full of spirits but it turn out that Acula is juts a guy named Karl and that even the woman in white is just an actress that he hired. ACULA’S A FRUAD!

Night of the Ghouls was filmed in 1959 but it went largely unreleased, largely because Wood didn’t have the money to pay off the lab fees. The film was erroneously thought to be lost until 1984, seven years after Wood’s passing. That was when a fan named Wade Williams discovered that a copy of the film was still being held by the post-production house. Williams paid the overdue lab fees and the film was finally released.

Night of the Ghouls is a typical Ed Wood film, which is to say that it’s in black-and-white, it’s extremely low budget, and it’s a lot of fun even though it’s not very good. The film’s plot has a make-it-up-as-you-go feel to it and, with a running time of only 70 minutes, it’s over before you can get too bored. While the cast may be largely inept, they’re also rather enthusiastic and it’s hard not to enjoy watching them try their best to sell Wood’s uniquely overbaked dialogue. The film also features not one but two appearances from Ed Wood himself! Not only is his picture hanging on the wall of the police station but Wood himself appears as a female ghoul.

Finally, fans of Ed Wood will also be happy to know that Night of the Ghouls contains references to both Bride of the Monster and Plan 9 From Outer Space, establishing that the Ed Wood cinematic universe existed long before Marvel made their first movie.