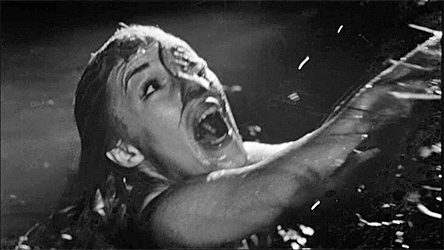 So, imagine that the year is 1963 and you are the legendary producer/director Roger Corman. You’ve just finished shooting your latest film and it turns out that you didn’t spend all of the money that you had allocated to make it! You’ve got an Irish castle at your disposal and some extra cash. Why not assign your ambitious assistant to make a quick little movie that’s specifically designed to cash-in on the success of Psycho and it’s numerous imitators?

And that, of course, is how Francis Ford Coppola came to direct his first film. Today, of course, Coppola is best known for directing three of the best American films of all time, The Godfather, The Conversation, and The Godfather Part II. (Some people would include Apocalypse Now in that list, as well.) In 1963, he was just another aspiring filmmaker making his debut under the watchful eye of Roger Corman.

Coppola both wrote and directed Dementia 13. The film’s a pretty nifty little horror/mystery. Of course, the plot doesn’t make much sense if you give it too much thought but any fan of the Roger Corman-style of film making should be used to that by now.

Luana Anders plays Louise Haloran, the film’s greedy femme fatale. When we first meet her, she’s calmly watching her husband drop dead of a heart attack. After learning that she’s not going to be receiving any sort of inheritance because her husband died before his mother, Louise decides to invite herself to the Haloran family castle, where her mother-in-law, Lady Haloran (Eithne Dunne), is about to take part in an annual ceremony that is meant to pay tribute to Haloran’s dead daughter, Kathleen. Looking for a way to try to trick Lady Haloran into making Louise her heir, Louise tries to fool Lady Haloran into believing that Kathleen is trying to contact her from beyond the grave.

Got all that? Because I’m not going to try to type it out again.

Anyway, I don’t want to spoil the rest of the plot but let’s just say that it all leads to a midnight swim and a shocking axe murder. Who could be the killer be? Could it be one of Louise’s two brother-in-laws, Richard (William Campell) and Billy (Bart Patton)? Could it be the local doctor, Justin Caleb (Patrick Magee?) Or how about Richard’s fiancee, the oddly named Kane (Mary Mitchell?” Or how about Simon (Karl Schnazer), the local poacher? Or maybe Kathleen really has risen from the dead? Or how about….

Well, look, it could be a lot of people. Dementia 13 has a labyrinth plot and it’s got a few twists that you probably shouldn’t spend too much time thinking about. It’s very much a young director’s film but, at the same time, that’s also the film’s greatest strength. Coppola reportedly got in trouble when the film went overbudget (which is something that had never previously happened on a Corman film) but the end result is a film that features several spooky visuals, an ominous atmosphere, and one very shocking murder. You wouldn’t necessarily watch a film like Dementia 13 and think that the director would go on to make something as great as The Godfather. But Coppola’s talent, even if it’s a bit unformed, is still very much noticeable while watching his directorial debut.

Speaking of watching the film, it’s in the public domain so it’s very easy to watch! Pick up a Mill Creek 50-DVD box set and there’s a good chance you’ll find Dementia 13 included within. Or, you can just go over to YouTube and watch it for free!