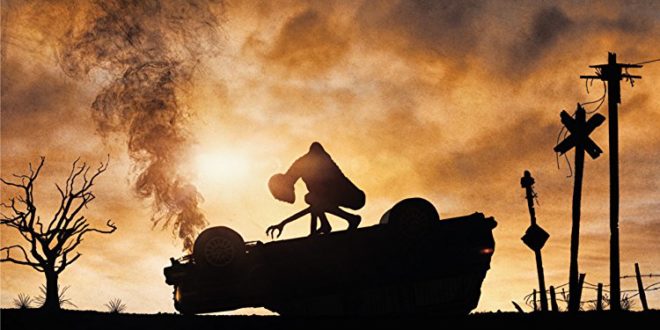 The world is ending and you’re stuck in the desert.  The vehicle you were driving has flipped over.  You’ve got a severely broken leg and can’t move.  The few remaining humans in the city have informed you that a rescue party will not be sent out until the sun rises.  And you’ve got a deformed creature circling your crashed van, trying to find a way to enter.

That’s the situation in which Juliet (Brittany Ashworth) finds herself in the 2017 film, Hostile.  While Juliet tries to survive the night, she flashes back to the life and the world she used to know.  She remembers how she was a nearly illiterate drug addict who met and fell in love with an art gallery owner named Jack (Grégory Fitoussi).  After discussing the paintings of Francis Bacon and the role of fate in everyone’s life, Jack took it on himself to lock Juliet in an apartment until she overcome her addiction.  Now, that’s not something that most professionals would necessarily recommend trying, especially when the addict and the apartment owner barely know one another.  But, in the case of Juliet and Jack, it all works out and they fall in love.  Juliet remembers the good times with Jack and she also remembers how their relationship eventually fell apart and how the world itself eventually started to end.  Meanwhile, the creature outside the van continues to try to find its way inside.

Hostile is a claustrophobic and atmopsheric end-of-the-world thriller from director Mathieu Turi.  The inside of that van is a properly ominous location and it’s impossible not to sympathize with Juliet as she struggles to figures out how to survive the night. The film’s deliberate pace takes some getting used to and the final twist requires a certain suspension of disbelief but both Ashworth and Fitoussi are well-cast as Juliet and Jack.  In the end the film, is a moody and interesting look at the end of the world.