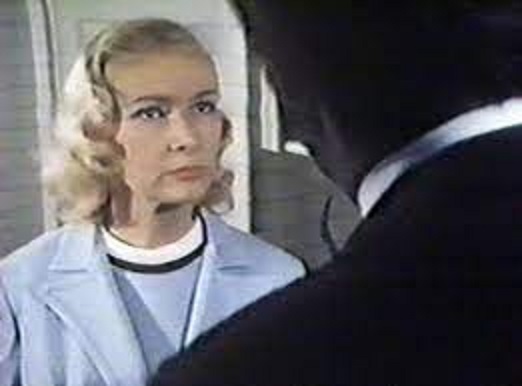 In the 1940s, Veronica Lake was undoubtedly a star.  She appeared in Preston Sturges’s classic comedy, Sullivan’s Travels.  She played the femme fatale in a series of classic film noirs.  She proved herself to be just as capable of playing comedy as she was playing drama.  By wearing her hair down and often allowing it to fall over her right eye, she created the peek-a-boo hairstyle.  She was briefly a star and a fashion icon but she also developed a reputation for heavy drinking and being difficult to work with.  During World War II, the U.S. government actually requested that Lake change her hairstyle in order to decrease incidents of women, many of whom were working factories as a part of the war effort, getting their hair tangled in the machinery.  Lake did so, cutting her long hair and going for a more practical look.  Her career never recovered.

The years following her 1940s heyday would not easy ones for Veronica Lake.  Along with multiple divorces, she also struggled with alcoholism and with the IRS.  Lake spent much of the 50s in England.  When she returned to the States in the 60s, she was arrested several times for public drunkenness and eventually took a job as a waitress to pay the bills.  A news story about her life as a waitress renewed some interest in Veronica Lake, as did the publication of her memoirs in 1969.  As so often happened with former stars who fell on hard times, she considered taking roles in the type of low budget films that she wouldn’t have even been offered when she was at the height of her fame.

That brings us to Flesh Feast.

In Flesh Feast, Veronica Lake is cast as Dr. Elaine Frederick.  Living in a dilapidated mansion in Florida, Dr. Frederick believes that she has discovered the perfect way to not only look younger but to also reverse the aging process itself!  It involves maggots, lots and lots of maggots.  For just a few dollars, Dr. Frederick will apply maggots to your skin and, like magic, they’ll suck away the years.  That may sound disgusting but, whenever the viewer is show Dr. Frederick working in her laboratory, it’s obvious that the maggots are instead grains of rice.

Dr. Frederick is approached by a group of South American neo-Nazis who want Dr. Frederick to use her maggots to make their leader young again.  They refuse to tell her the name of their leader but you can guess who it is, right?  I mean, he’s living in Argentina.  He’s in hiding.  The rest of the world thinks that he’s dead.  He’s German.  He used to be involved in the government …. oh, okay, I’ll tell you.  It’s Hitler.  The group wants Dr. Frederick to use her maggots to make Hitler young again.  Dr. Frederick agrees but it turns out that she’s only interested in getting revenge!

There’s a lot of negative things you can say about Flesh Feast but it’s perhaps the only film to feature Veronica Lake laughing as a bunch of maggots eat Hitler’s face.  Don’t get me wrong.  It takes forever to actually reach that moment.  There’s a whole subplot about a journalist trying to investigate Dr. Franklin’s experiments.  As well, Dr. Franklin’s assistant is an undercover government agent and she keeps stumbling across dead bodies at inopportune times.  The first 70 minutes of Flesh Feast are about as draggy and boring as any movie that I’ve ever seen.  But, after all that, you get to see Veronica Lake kill Hitler.  Some would say that’s definitely worth the price of admission!

Flesh Feast was Veronica Lake’s final movie.  (She not only starred in the film but she co-produced it as well.  Director Brad Grinter was also responsible for Blood Freak.)  It was filmed in 1967 but not released until 1970, after the publication of her memoirs renewed interest in her career.  Unfortunately, Flesh Feast didn’t exactly do well at the box office.  Lake would die just three years later, at the age of only 50.  But her films and her performances will live forever. 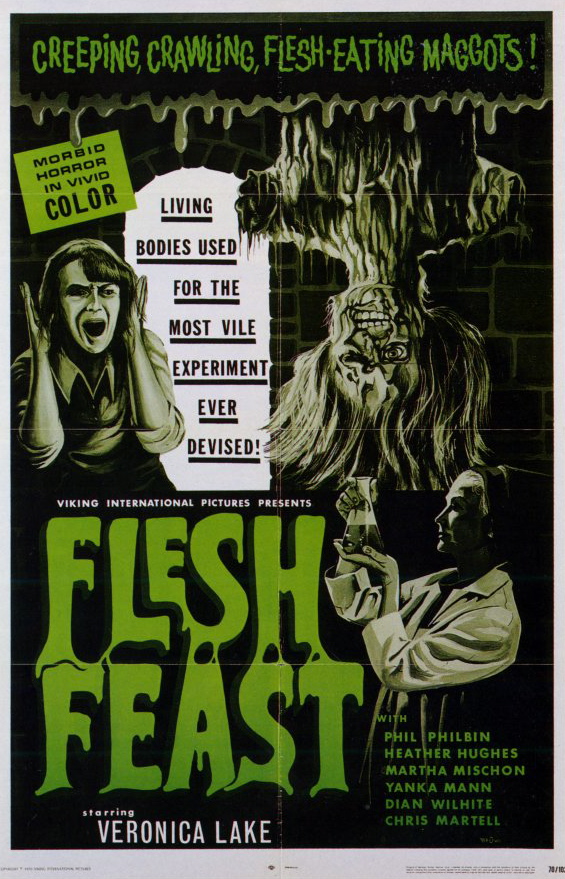