At the start of 1980’s The Day Time Ended, the Williams Family has relocated to the desert!

Grandpa (Jim Davis), Grandma (Dorothy Malone), Richard (Christopher Mitchum, looking a lot like his father, Robert), Beth (Marcy Lafferty), and their young daughter, Jenny (Natasha Ryan) have moved into a very nice ranch house that appears to be sitting in the middle of nowhere.  The house comes with a barn, a few horses, and …. ALIENS!

At first, Jenny is the only one to notice the strange blue light that keeps glowing behind the barn.  But soon, the rest of the family is seeing UFOs and weird creatures are knocking on the front door and saying hi.  Lizard men appear in the distance and beckon for the family to follow them.  Soon, the house itself is being zapped through time and space….

This going to be a short review but, then again, The Day Time Ended is a short movie.  With a running time of only 75 minutes (not including the end credits), The Day Time Ended feels less like a movie and more like an extended episode of The Twilight Zone.  That said, if it was an extended episode of The Twilight Zone, it would be considered to be one of the more enjoyable episodes of the series.  While none of the characters are particularly complex or deeply written, the cast is believable as a family and everyone does a good enough job that the viewer won’t want to see anything bad happen to any of them.  (I’m also happy to say that all of those horses are really pretty and — fear not! — for once no harm befalls any of the animals.)  The motives of the aliens are kept ambiguous throughout the film, leaving the viewers as confused and intrigued as the family and the final shot is somehow both silly and tremendously satisfying at the same time.  The Day Time Ended is a B-movie but it’s an entertaining B-movie.

Directed by B-movie specialist, John “Bud” Cardos, this is one of those movies where the cheapness of the special effects add to the film’s charm.  Initially, the UFOs are represented by lights darting through the sky.  (Residents of Texas will immediately think of the Marfa Lights.)  When the UFOs are finally seen in close-up, they are obviously plastic models but, in this age of excessive CGI, there’s something undeniably charming about the idea of going to the trouble to build plastic models.  The claymation aliens are adorable!  Seriously, there are some films that you just can’t help but kind of love and, for me, The Day Time Ended is one of those films. 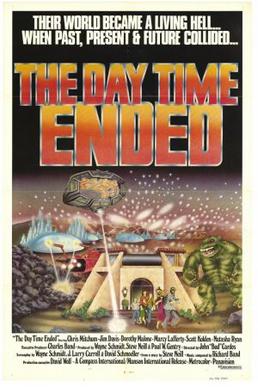