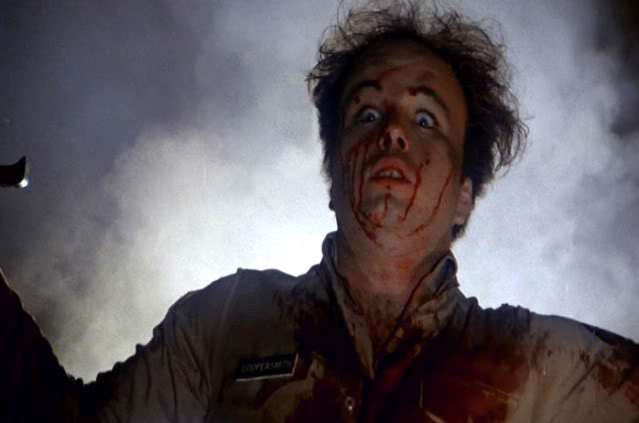 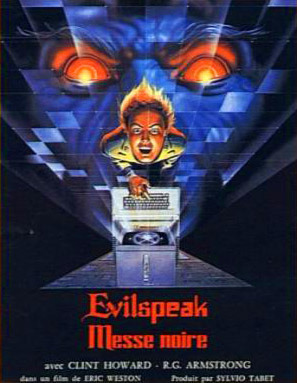 I first came across Evilspeak about 3 years ago when I was browsing through the selection of used DVDs at the Movie Trading Company in Plano, Texas.  Why did I feel so compelled to buy this movie that I had previously never heard of?  Of course, a lot of it was due to the fact that Evilspeak was a horror movie.  I have to admit that the vagueness of the title intrigued me.  It also helped that the Evilspeak DVD was released by Anchor Bay and that it only cost $1.99.

When I sat down and watched Evilspeak for the first time, I discovered that it was, in many ways, typical of the horror films that were released in the early 80s.  (Evilspeak came out in 1981.)  However, thanks to a strong lead performance from Clint Howard and a few surprisingly original touches on the part of director Eric Weston, Evilspeak turned out to be an oddly compelling little horror film.

Evilspeak opens with a lengthy prologue in which we see a Satanist named Esteban beheaded, along with several of his followers, by the Spanish Inquisition.  Jump forward several hundred years to a soccer game being played by teams representing two separate military academies.  The players are all typical jocks except for one pudgy, awkward fellow named Stanley Coopersmith (played by a very young Clint Howard).  Coopersmith manages to lose the game for his team.  The team’s angry response establishes that 1) this is not the 1st game that Coopersmith has lost and 2) all of his teammates are apparently psychotic.  His fellow players complain to their coach about Coopersmith’s lack of ability.  The coach replies that school policy requires that Coopersmith be allowed to play but if Coopersmith were to suffer some sort of injury (hint, hint) then they wouldn’t have to worry about school policy.  Seriously, has anything good ever come from soccer?

In many ways, Stanley Coopersmith might seem typical of the horror movie pariahs who always seem to end up asking Satan to kill their peers.  However, there are a few things that set Stanley apart.

First of all, he has one of the best last names in film history.  Coopersmith.  Just say it five times straight and see if it doesn’t get stuck in your head.  I’ve known plenty of Smith and more than a few Smiths but I’ve never known a Coopersmith.  At first, I thought that maybe Stanley had one of those really cool hyphenated names and I was instantly jealous.  I’ve always wished my mom had done that when she got married so I could introduce myself as “Lisa Marie Marchi-Bowman.”  Of course, it’s probably for the best that she didn’t because if she had, I would have become obsessed with finding a mate with a hyphenated last name of his own just to see how long I could eventually make my last name.  But I digress.  Even though the film clearly establishes that there is not hyphen in Coopersmith, it’s still a great name.  When Stanley’s classmates insist on calling him “Cooperdick,” it just makes them all the more loathsome because not only are the insulting Stanley but they’re failing to recognize the beauty of a good name.

The other thing that sets Stanley apart from other movie outcasts is that he actually looks like an outcast.  He’s not a teen idol wearing a bad wig and prop glasses.  This is largely because Stanley Coopersmith is played by Clint Howard (as opposed to Ron Howard).  Pudgy with visible acne and a somewhat whiny voice, Clint Howard transforms Stanley Coopersmith into every kid that you ever felt sorry for but never dared to befriend.  Watching the movie, you feel sorry for Stanley but you never quite like him.  You’re on his side because every other character in the movie appears to be subhuman.

The film follows Stanley as he is continually attacked and humiliated by basically everyone else in the entire movie.  Now, as someone who did time at more than one Catholic school, I have personally experienced the fact that private schools really are a world of their own.  That said, however, Evilspeak’s military academy appears to be less a school and more some sort of elaborate and sadistic sociological experiment.  Seriously, is there anyone at this school who isn’t obsessed with tormenting Stanley?  (Actually, Stanley does have one friend but he’s kinda useless.)

Of course, one of the school’s problems might be that it has apparently been built on land that was once owned by — you guessed it — Esteban!  As the film opens, Coopersmith has found himself assigned to clean up the school’s chapel as part of a “punishment detail.”  While doing this, Coopersmith happens to stumble upon Esteban’s tomb and, in that tomb, he finds a lot of candles, what appears to be a fetus in a jar, and a black book that happens to have a Satanic symbol on the cover.  Intrigued, Coopersmith steals the book despite the fact that it’s written in Latin.

Luckily, this school has a computer!  Admittedly, Evilspeak came out four years before I was born so perhaps I’m not capable of understanding what the world was like in the early 80s.  Still, I’m always amazed to see the awe that computers were apparently regarded with back then.  Apparently, at the time, a personal computer was the ultimate elite status symbol.  All one needed to rule the world apparently was one bulky computer.  Fortunately, Coopersmith doesn’t want to rule the world.  He just wants to read his book.  He does this by typing the latin phrases into the computer and magically getting an English translation in response.  Thanks to his magic computer, Coopersmith discovers that the book was written by Esteban and  that Esteban worshipped Satan.

Coopersmith, of course, is amazed to discover this but we, the viewers are not.  After all, we’ve already sat through the entire prologue.  Unfortunately, it takes Coopersmith almost the entire movie to catch up to where we are from the beginning.  Fortunately, Clint Howard gives a good enough performance to keep the movie vaguely interesting even when it starts to drag.

Fortunately, after Coopersmith gets his translation, the action starts to pick up a bit.  For one thing, the book is stolen by the headmaster’s secretary (who, in an amusingly odd moment, smiles to herself as she listens to the headmaster paddling Coopersmith in his office).  For another thing, Coopersmith decides to get back at his enemies by conducting a black mass.  He does this by turning on his computer (which has now somehow been moved down to the tomb) and asking what he needs for a black mass.  Naturally enough, the computer tells him because it’s a computer and it knows everything. 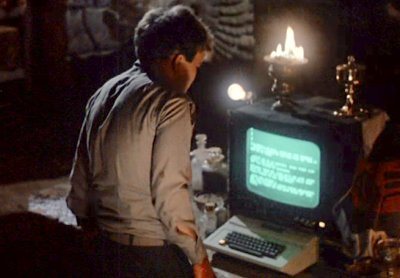 But before Coopersmith can perform his black mass, he still has to be humiliated a few hundred more times by his classmates.  He also has to deal with a drunk janitor (played by R.G. Armstrong).  On top of that, he adopts a puppy.  Unfortunately, since Coopersmith is the school outcast, that also means that the puppy is fair game too.  After one night of heavy drinking, Coopersmith’s classmates (led by a kid named Bubba, so you know he’s evil) find his hideaway in the tomb and, for reasons that don’t quite make sense, they sacrifice his puppy.

(At this point, I was wondering if maybe it would turn out that the military academy was actually an insane asylum.  I mean, seriously –  on which level of Hell is this place located?)

Meanwhile, you remember that sadistic secretary that stole Coopersmith’s book?  Well, for whatever reason, she is obsessed with trying to pry that Satanic symbol off the cover.  Unfortunately, since she’s the only prominent female in an early 80s horror movie, this can only mean that she’s destined to meet a bloody end while taking a shower.  Which, in this movie’s best known scene, is exactly what happens.  However, she doesn’t meet her end at the hands of a knife-wielding psycho.  Instead, she’s attacked and ripped to pieces by a bunch of rampaging pigs.  And yes, the whole thing is faintly ludicrous and yes, the low-budget gore effects are undeniably crude, but it’s still an undeniably effective sequence.  Perhaps its due to the fact that pigs, in general, are filthy.  Don’t even get me started on pigs.  However, it must also be admitted that, though his direction is often time uninspired, Eric Weston shows an undeniable talent for capturing chaos.  I am not ashamed to admit that I had pig-related nightmares after seeing this movie. 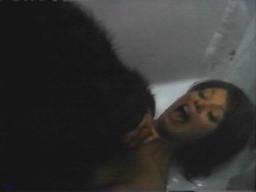 Following the death of the secretary, the book mysteriously reappears in Esteban’s tomb.  Coopersmith finds it the next morning along with the corpse of his puppy.  Obviously, this is all it takes for Coopersmith (with the help of his computer) to carry out his black mass and to finally take his revenge.

Of course, the whole point of a Nerd-With-Powers movie is the finale where that nerd takes vengeance on his tormentors.  If this scene is pulled off with even the slightest amount of panache, it can make up for almost everything that’s come before it.  The prom inferno fromCarrie pretty much set the standard by which all others are judged.  Personally, it’s hard for me to think of any movie that could improve on the final house party massacre in The Rage: Carrie 2.  After all, how can you top a blinded Rachel Blanchard accidentally shooting the oldest Home Improvement kid in the balls with a spear gun?

Evilspeak doesn’t quite reach those heights in its finale but it’s still pretty effective.  If nothing else, the sight of Clint Howard wielding a sword while flying above his tormentors is a lot more effective than you might think.  Over the next few minutes, spikes are drilled into foreheads, heads are chopped off, hearts are ripped out of chests, and those pigs show up again.  The gore effects here are undeniably crude but oddly effective.  This sequence (along with the previous pig shower attack) actually inspired a few nightmares the night after I sawEvilspeak. 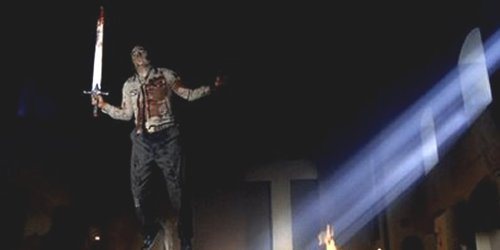 Evilspeak is an odd little movie.  While the plot should be familiar to anyone who has ever seen a horror film, there’s a real nastiness at the core of Evilspeak that distinguishes it from other genre offerings that came out during the same period.  At times, Evilspeak almost feels like an Italian film which is probably why I found it to be so oddly compelling.

The Evilspeak DVD features a commentary track featuring both Clint Howard and the film’s director.  I always feel some trepidation before listening to a commentary track.  Too often, the track turns out to just be some jerk explaining how he financed the film for two hours while commenting not at all on the action on-screen.  (For the most part, if a commentary track features any anecdote that begins with, “We had the same lawyer…” you know you’re in trouble.)  However, the Evilspeak track is surprisingly enjoyable.  Clint Howard comes across as a surprisingly likable, levelheaded guy and its interesting to contrast his odd wholesomeness with the action onscreen. 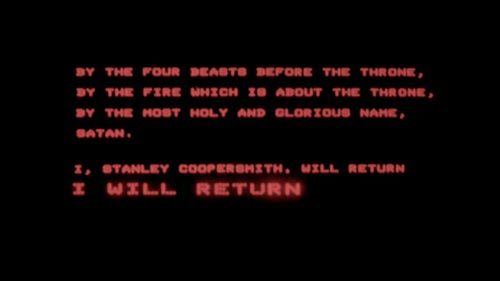