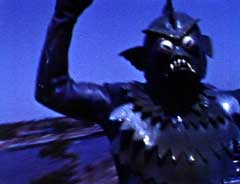 In this 1967 film from venerable B-movie director Larry Buchanan, a psychic con artist uses hypnosis to bring back into existence a prehistoric, humanoid amphibian.

Okay, so the story doesn’t make much sense.  In fact, I would be lying if I said that I fully understood the film, despite the fact that I sat through all 88 minutes of it on Saturday night.  Basically, Dr. Basso (Les Tremayne) is a hypnotist and an occult historian.  He’s bitter about the fact that the world doesn’t appreciate him or take him seriously, despite the fact that he spends almost the entire film wearing a tuxedo and he has a head of silver hair that would have made even the great Criswell jealous.  So, Basso decides that the best way to prove his powers would be start predicting when people are going to die.  And the way he does that is by hypnotizing his assistant, Doreena (Pat Delaney).

Somehow, hypnotizing Doreena causes this prehistoric humanoid monster thing to rise out of the nearby lake so that it can kill whoever Dr. Basso wants dead.  It’s interesting that Dr. Basso could figure out how to bring an extinct creature back to life but he could come up with a less destructive way to prove his powers.  This is just my opinion but it seems like he could have just displayed the prehistoric monster and that would have proven his powers far more effectively than committing murders.  Dr. Basso’s plan is needlessly complicated.  Neither Dr. Basso nor the film ever seem to consider what would happen if he was asked to prove his powers while performing somewhere that wasn’t conveniently located near a lake.  If Dr.  Basso ever plays Vegas, he’s in trouble.

Anyway, it falls of Lt. Blake (Roger Ready) and Captain Dell (Aron Kincaid) to figure out how to stop Dr. Basso.  Captain Dell is not just an expert on the occult but he’s also an Air Force psychiatrist, so he goes through the entire movie wearing his uniform.  Dell being in the Air Force doesn’t really figure into the plot otherwise.  He could just as easily be in private practice.  One gets the feeling that he was made an Air Force captain just because someone had the uniform and it looked good on Aron Kincaid.

Creature of Destruction is a fairly confusing film.  Unfortunately, it’s also a rather boring film.  Larry Buchanan was a prolific director but he was never a particularly good one.  Some directors knew how to take advantage of a low budget and less than compelling actors.  Unfortunately, Buchanan really wasn’t one of them.  Still, the lake scenery is nice and it’s kind of fun to watch the monster waddle across the screen.  As  well, there are two musical interludes that come out of nowhere but which are amusing in a late 60s beach movie sort of way.  So, the film has that going for it.  Otherwise, not even hypnosis will help you get through Creature of Destruction. 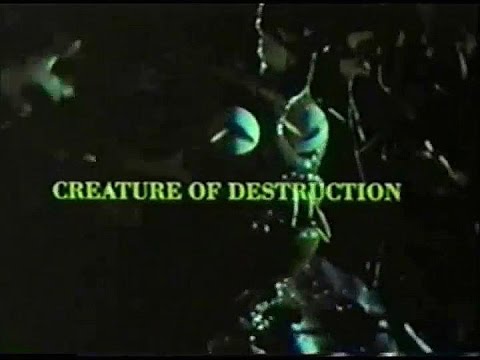