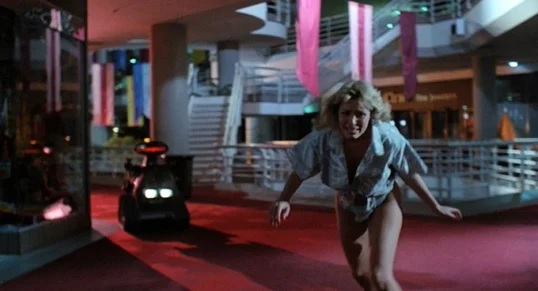 This 1986 film tells the story of what happens when one local mall decides that it’s had enough of thievery and vandalism.

First off, automatic locks and shutters are installed.  What that means is that, at a certain hour, anyone who is inside the mall is going to be trapped there until the morning.  Secondly, three robots are used as a security force.  They’re called Protectors and they roll around, looking for thieves and keeping people safe.  Don’t worry about getting mistaken for a thief, of course.  As long as you’ve got a badge, the protector will just say, “Thank you and have a good day.”

It all seems perfect but …. what if the robots malfunction?  What if they ignore the badges and just start killing anyone unlucky enough to be trapped in the mall for the night?  Surely, that could never happen, right?

Of course, it does happen.  Thanks to a freak electrical storm, the Protectors come to life and set out to keep the mall safe from intruders.  First, they kill the technicians that are supposed to keeping a watch over them.  Then, they kill a janitor named Walter Paisley (played, of course, by Dick Miller).  Then, they set off after the six attractive people who were having a sleep-over in one of the stores.

So, what did I learn from Chopping Mall?

Well, I was tempted to say that I learned not to shoplift but actually, no one in the movie gets in trouble for shoplifting.  I guess the main thing I learned is not to walk around the mall in my underwear because that definitely seems to be something that will cause the Protectors to blow up your head.

I also learned that, if you’re tapped in the mall with a bunch of killer robots, the best place to go is the sporting goods store because that store not only has a lot of automatic rifles but also an unlimited supply of ammunition.  Of course, I already learned that from Dawn of the Dead but it’s always good to be reminded….

Anyway, Chopping Mall is a lot of fun.  It’s undeniably dated.  Just the fact that everyone’s life revolves around a mall tells you just how dated it is.  I guess if they made the film now, it would have to take place at an Ikea store or maybe an Amazon warehouse.  But the fact that the film is dated is a part of what makes it so much fun to watch.  Seriously, it’s amazing all of the stuff that apparently used to go on at the local mall in the 80s.

Despite the fact that they have a bad habit of killing people, the Protectors are actually kind of cute.  If nothing else, they’re unfailingly polite.  You have to love the fact that they’ll wish you a nice day even after they’ve killed you.  Surprisingly enough, the humans are just as likable as the Protectors.  For a film about killer robots, Chopping Mall is surprisingly well-acted by a likable cast.  Russell Todd, who was the best-looking man to ever be killed by Jason Voorhees, is in this film and he’s as broodingly handsome here as he was in Friday the 13th Part II.

Chopping Mall is a good mix of humor and thrills and robots and exploding heads and Dick Miller.  This is 80s mall horror at its best! 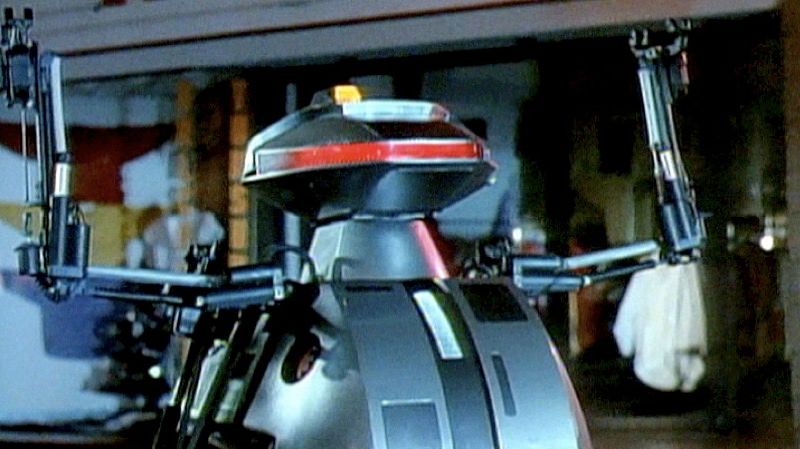