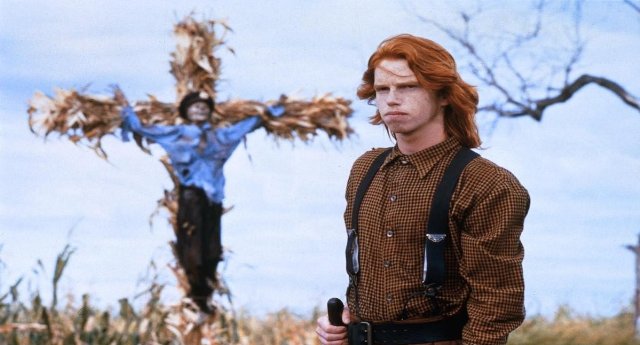 What to say about the original Children of the Corn?

First released in 1984, this film was based on one of Stephen King’s least interesting short stories. It’s a pretty dumb and poorly-paced movie, featuring villainous puritan children who are more annoying than menacing. The heroes aren’t particularly likable, even if one of them is played by Linda Hamilton. And yet, somehow, Children of the Corn spawned an 11-entry film franchise. (The 11th Children of the Corn film was released in 2020, 36 years after the original.) The original film was remade in 2009 and it continues to be a familiar reference point on the pop cultural landscape. I’ve lost track of the number of Children of the Corn parodies that I’ve seen.

The plot is pretty simple. One day, all of the children in a small rural town get together and kill all the adults. They worship a mysterious entity called He Who Walks Behind The Rows and they sacrifice any adult who is stupid enough to wander into town. The leader of the children is shrill-voiced little twerp named Isaac (John Franklin) and his second-in-command and chief enforcer is the sullen Malachai (played by Courtney Gaines). The children all dress like 1880s settlers and they spend a lot of time staring at each other. Eventually, Malachai overthrows Isaac and ties him to a cross, which leads to a seemingly endless scene of Isaac screeching, “Malachai!” over and over again.

Meanwhile, two adults have accidentally driven into town, Burt (Peter Horton) and his girlfriend, Vicky (Linda Hamilton). They end up running over a child who was trying to flee the cult. They put the body in the trunk of their car and then they kind of forget about it. In their defense, they’ve got a lot to deal with. The children want to sacrifice Vicky and Burt wants to lecture all of the children about how their backwards ways are ruining America. I’m not kidding. This film about children wearing old timey clothes and talking about He Who Walks Behind The Rows tries to convince the viewers that it has a sincere message.

Children of the Corn was not the first movie about killer children but it’s certainly one of the most influential. You have to wonder why because the film itself simply isn’t very good. Beyond the bad acting and the heavy-handed sermonizing, the film’s pacing is all off. A simple story shouldn’t have this many slow spots. Director Fritz Kiersch falls so in love with shots of that haunted cornfield that he forget to use them to tell a compelling story.

And yet, it can’t be denied that there is an audience for this film and the many sequels that followed. I imagine some of it has to do with the fact that people are just fascinated by the idea of evil children. We’re expected to like and forgive the behavior of children, regardless of how obnoxious they may be. Movies like Children of the Corn exploit a real fear that many people have, that children will figure out that they can get away with murder and therefore, they will. It’s a simple and not particularly well-executed idea but it’s one that led to an 11-film franchise so I guess one should never discount the value of keeping it simple.