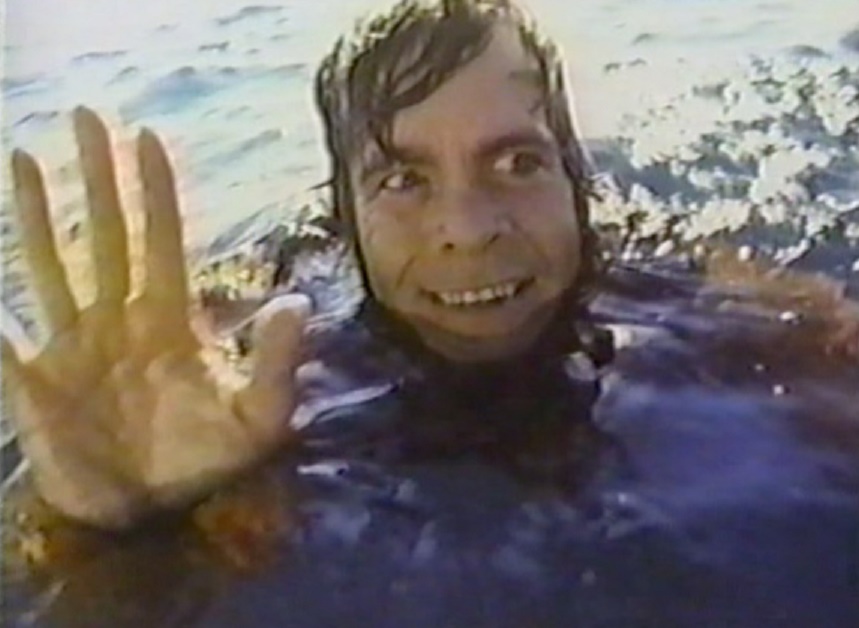 At the start of this made-for-TV movie from 1975, the coat guard receives a distress call from a boat in the middle of the Bermuda Triangle. Lt. Haig (Doug McClure) and Lt. Commander Pagnoli (Michael Conrad) get in a helicopter and fly out to answer the SOS. When they find the boat, Haig lowers himself down to the vessel and discovers several disturbing things.

First off, there’s a priest hanging from the mast. There’s two more dead bodies below deck and one of them appears to be floating in mid-air! As Haig searches the ship, he discovers that there’s only one survivor, a frightened woman named Eva (Kim Novak). When Haig and Eva attempt to board the helicopter’s rescue basket, the line snaps, the basket falls into the ocean, and the two of them are forced to swim back to the boat. While Pagnoli returns to the base to refuel and get help, Eva tells Haig what happened on the boat.

Eva explains that she’s a prostitute, hired to keep the men on the boat company for the weekend. Shortly after the boat left shore, they came across a lifeboat that was occupied by a mysterious priest named Father Peter Martin (Alejandro Rey). As soon as the priest boarded the boat, mysterious things started to happen. Eva swears that it was all the priest’s doing and that the boat has been cursed. Haig, however, looks for a more “reasonable” explanation….

Yeah, good luck with that, Lt. Haig! This movie is called Satan’s Triangle for a reason!

Clocking in at just barely over 70 minutes, Satan’s Triangle is short but effectively creepy movie. Director Sutton Roley does a good job of creating a properly ominous and claustrophobic atmosphere and, while Doug McClure is a bit of a stiff in the lead role, both Kim Novak and Alejandro Rey give good performances as characters who may not be quite what they seem. For a low-budget, made-for-TV film from the 70s, Satan’s Triangle holds up surprisingly well and there’s a well-handled twist at the end that makes the entire film worth watching.

Satan’s Triangle can currently be viewed on both Prime and YouTube and it’s perfect if you’re looking for an enjoyably creepy diversion.