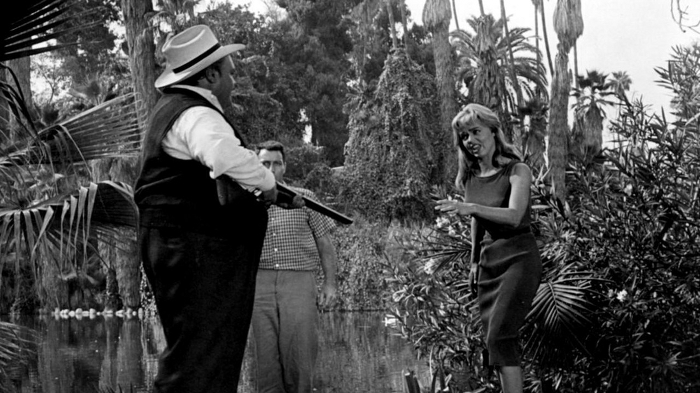 It’s time for nonstop drama in the bayous!

Shopkeeper Dave Walker (Bruno VeSota) knows that his wife, Liz (Yvette Vickers), is cheating on him with his best friend, Cal (Michael Emmett)! Dave is determined to catch them in the act and force them to walk out into the middle of the swamp at the end of his shotgun. That would be bad enough but what makes the swamp even more dangerous is the fact that there are two giant leeches living in the water, grabbing whoever they can get and dragging them back to their underground cave! Agck! While Dave plots to get revenge on his cheating wife, game warden Steve Benton (Ken Clark) tries to convince everyone that something really needs to be done about those giant leeches.

Filmed and released in 1959 and produced by Roger Corman, Attack of the Giant Leeches is not a particularly complicated film. The leeches live in the swamp. For various reasons, people keep wandering into the swamp. The leeches keep feeding until eventually, the authorities decide to do something about it. The simplicity of it all is why the film works. Why are there giant leeches in the swamp? How did the leeches become giants in the first place? Who cares? What’s important is that they’re there and they’re hungry for blood. At this point, why doesn’t matter. What matter is what is going to be done about them.

Clocking in at barely an hour and filmed by TV director Bernard L. Kowalski, Attack of the Giant Leeches is an enjoyably overhearted slice of Southern melodrama, full of humid atmosphere and sultry dialogue. Yvette Vickers plays the role of Liz with a wonderfully defiant attitude. She’s going to do what she wants when she wants to and if that means running the risk of being forced to walk into the swamp, so be it. If she’s stuck in the bayous, she might as well have a good time. Meanwhile, VeSota turns Dave into a rather tragic buffoon. Even when he finally thinks that he’s about get his revenge, it turns out that the universe has other plans in store for him.

Attack of the Giant Leeches is short but enjoyable and, because the copyright wasn’t renewed, it’s in the public doman and it’s very easy to watch for free. Watch it this Halloween and definitely stay out of the swamp!