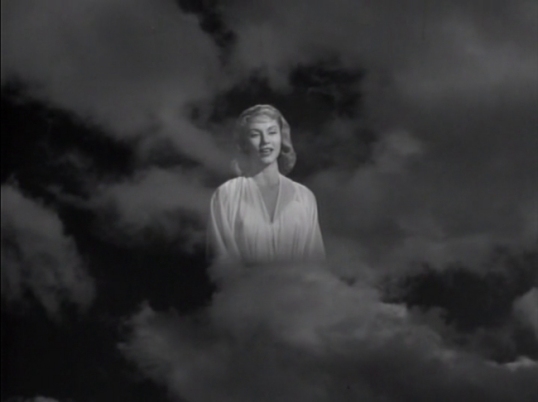 Because he’s continually haunted by strange dreams, Rick hasn’t been getting much sleep.  As he explains to his incredibly understanding girlfriend, Donna (Ariadna Welter), the dreams involve a vision of a beautiful woman named Bianca (Linda Christian), who appears to be standing in the clouds while wearing a sheer negligee and calling out to him.

Donna insists that it’s probably nothing but Rick says that, after his last dream, he felt himself being drawn to a doll shop in downtown Los Angeles.  When Rick and Donna go down to the shop, they discover a doll of Bianca sitting in the window.  The owner of the shop, Frank (Neil Hamilton), insists that Rick came in earlier and specifically requested that Frank design the doll so that he could send it as a gift to another woman.  You would think that would upset Donna but she’s more interested in the fact that she’s found a doll that looks exactly like her.

Well, you can probably guess what happens.  Eventually, the doll that looks like Donna ends up pinned to the wall of the shop and Donna ends up in the hospital with a mysterious illness.  Rick manages to track down the real-life Bianca, who greets him in her apartment while wearing the same negligee from Rick’s dreams.  Bianca explains to Rick that she’s been reaching out to him because she wants him to join a cult that worships “Gamba, the Great Devil Dog.”

It turns out that the cult meets in the back of Frank’s doll shop.  Rick attends a meeting with Bianca and discovers that the cult is made up of exclusively of beautiful young women and bland, middle-aged men.  He even gets to witness a near-human sacrifice involving a wheel that’s studded with knives.  As Bianca explains it, Gamba sometimes turns the knives into rubber and then sometimes, he doesn’t.  Gamba’s unpredictable like that.

Bianca explains that Rick can have everything he wants if he just gives his soul over to the Devil Dog.  But what about Donna, who is still in the hospital?

The Devil’s Hand is a low-budget but occasionally effective horror film from 1962.  (Apparently, it was originally filmed in 1959 but it wasn’t released until 3 years later.  Linda Christian later said that she never actually got paid for appearing in this film, as the production company apparently ran out of money during filming.)  Oddly enough, the film opens with extremely cheerful surf music, which leads you to suspect that you’re about to see some sort of weird beach comedy.  Instead, The Devil’s Hand turns out to be a film about a cult operating in the shadows of Los Angeles.

The cult is probably the most interesting thing about the film.  Though the film doesn’t specifically call attention to this fact, it’s hard not to notice that most of the male cult members appear to be either accountants or middle-management types, the type who wear cheap suits and too much cologne.  It’s impossible not to be amused by the idea of a bunch of middle class nobodies gathering in the back of a doll shop so that they can worship the Great Devil Dog.  Neil Hamilton and Linda Christian are both perfectly cast as the leaders of the cult.  Hamilton is properly menacing while Christian seems to be having fun tempting Rick into the darkness.

Unfortunately, Rick’s not a very likable protagonist.  Even though his girlfriend is in the hospital, Rick doesn’t have any problem with going to the horse track and playing the stock market with Bianca.  In short, Rick comes across as being a bit of a jerk and you can’t help but feel that Donna might be better off without him.

Anyway, The Devil’s Hand is an entertaining occult film, one that’s definitely not meant to be taken too seriously.  It’s only 71 minutes long so it really plays more like an extended episode of an old anthology show than anything else.  (It just needs a narrator.)  The story moves quickly and you’ll never forget those accountants in the back of the doll shop.