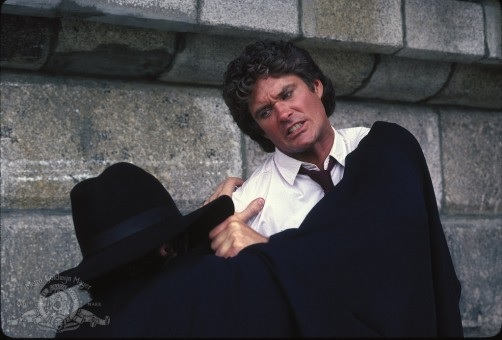 On a foggy London night in 1888, the shadowy killer known as Jack the Ripper is pursued by a combination of police and citizens.  Cornered and facing certain execution if captured, Jack jumps off of London Bridge and disappears into the murky waters of the Thames.

Jump forward to the late 80s.  London Bridge has been transported, brick-by-brick, to a town in Arizona and it now serves as a somewhat tacky tourist attraction.  Unfortunately, it turns out that Jack the Ripper’s spirt is inside in the bricks and transporting the bridge has also transported Jack.  Considering that Jack died in the Thames, I’m not really sure why his spirit will still be trapped in the bricks of the bridge.  It seems like his spirit should still be in the river but whatever.  Let’s just go with it.  One tourist accidentally cuts her finger while walking across the bridge.  Her blood hits the wrong brick and suddenly, Jack the Ripper is alive and killing in Arizona!  Can the murders be stopped before they interfere with the tourist season!?

Only Detective Don Gregory (David “The Hoff” Hasselhoff) thinks that Jack the Ripper has returned to life.  His captain (Clu Gulager) doesn’t believe him.  The sleazy city councilamn (Lane Smith) doesn’t believe him.  His potential girlfriend, Angie (Stepfanie Kramer), has doubts about Don’s theory.  His own partner (Randolph Mantooth) doesn’t buy it.  Even Angie’s best friend, a librarian named Lynn (Adrienne Barbeau), doesn’t think that there’s any connection between Jack the Ripper and the handsome Englishman (Paul Rossilli) who has recently been stopping by the library and flirting with her.

And really, why would anyone believe Don?  His theory makes no sense, even if it does turn out to be true.  Indeed, Don is remarkably quick to accept the idea of Jack the Ripper traveling through time.  Of course, what also doesn’t make sense is the city council’s refusal to shut down the bridge until the killer’s been caught.  It’s the tourist season but seriously, it seems like a serial killer — whether he’s Jack the Ripper or not — would be bad for business!

This 1985 movie was made for television.  The premise is intriguing but the execution is a real let-down.  It’s a 90 minute film and the Hoff doesn’t really seem to get serious about trying to hunt down Jack the Ripper until 60 minutes in.  This is the odd Jack the Ripper film in which the Ripper is often treated as an afterthought.  Instead, the majority of the film is taken up with Don flirting with Angie and trying to come to terms with an accidental shooting that occurred when Don was a cop in Chicago.  The whole Jack the Ripper subplot is almost treated like a red herring, which is an odd way to treat a 19 century villain who can travel through time.  I mean, sometimes, romance has to wait until the time-traveling serial killer has been taken care of.  It’s all about priorities.

In the end, this one is for hardcore Hasselhoff fans only.  Those who want to watch a Jack the Ripper time traveling movie would be better served by watching Time After Time, featuring David Warner as the Ripper and Malcolm McDowell as H.G. Wells. 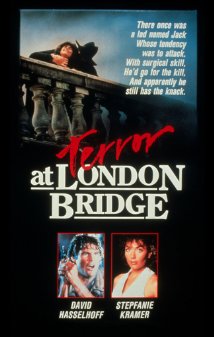