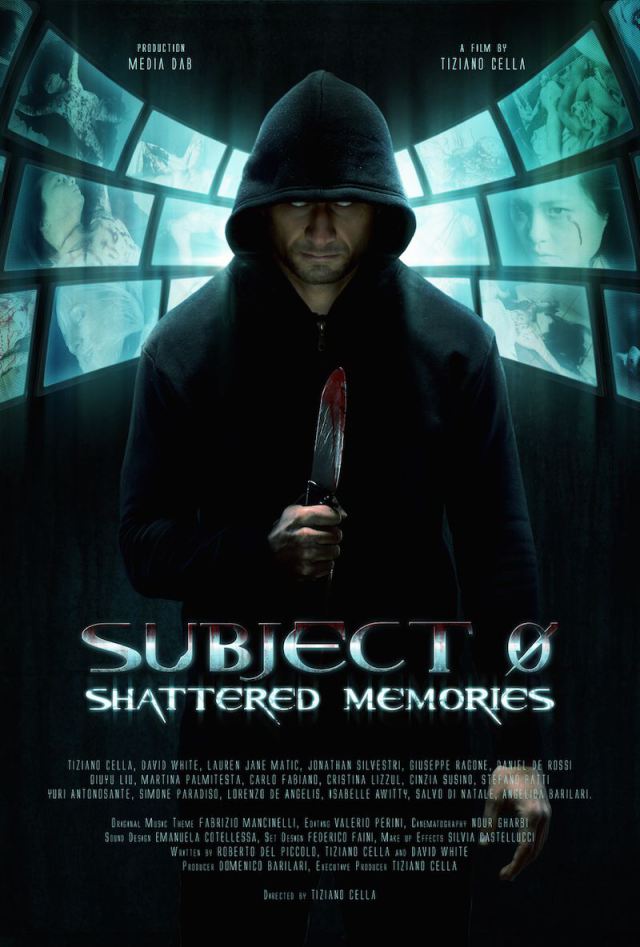 I recently had the chance to watch Subject 0: Shattered Memories, the feature-length debut of director Tiziano Cella.

Subject 0 is a film that juggles several different but ultimately connected storylines.  In Rome, a woman wakes up one morning to discover that her lover has been murdered while she was asleep.  Her husband, at first, acts as if he’s shocked to discover that she was cheating on him but, as the film progresses, we have reason to doubt anything that he says.  As the film progresses, more and more people turn up murdered.  A police inspector tries to solve the crime but he has no idea that one his colleagues has an agenda of her own.

Meanwhile, Josh (played by the film’s director) divides his time between his apartment and work.  He has a crush on a co-worker but she already has a boyfriend.  Josh’s neighbor continually threatens to call the police on him for making too much noise.  All the while, Josh finds himself having hallucinations and comes to realize that there are huge chunks of his day that he cannot remember.  Is Josh the murderer or is there something else going on?

And could it have anything to do with a group of sinister business executives who have been working on a project to develop a super soldier?

As a lot of our readers I know, I absolutely love old school Italian thrillers.  Whether it’s the classic giallo films of Mario Bava, Dario Argento, and Sergio Martino or the gore-filled waking nightmares of Lucio Fulci, I love Italian horror.  Subject 0 is a throwback to those old horror films, which is one reason why I enjoyed it.  It combined the gore of Fulci with the suspense of Bava and the imagery of Argento and, as a result, Subject 0 is a tribute to everything that we love about Italian horror.

With the way that Subject O combined multiple storylines, body horror, conspiracy paranoia, and domestic drama, it also reminded me a bit of the classic British horror film, Scream and Scream Again.  Much like that film, Subject 0 demands a little patience.  Not all of its mysteries are immediately solveable.  The clues are provided but, often times, it is up to the audience to put them together.  (Subject 0 respects the intelligence of the audience and isn’t that a nice change of pace?)  But for the observant viewer, Subject 0 delivers a powerful and, in its way, thought-provoking payoff.

In the end, Subject 0 is a nice combination of visceral shock and more subtle psychological thrills.  Tiziano Cella does excellent work as both a director and an actor in this film and I look forward to seeing what he brings us in the future!