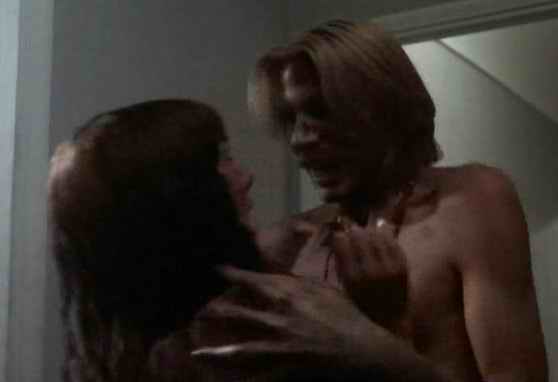 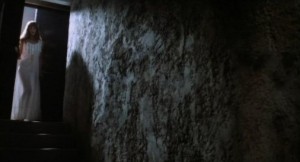 Though it seems that he’ll never get the credit that he truly deserves, Italian director Mario Bava was truly one of the most influential and important filmmakers of all time.  While he spent most of his long career making genre films, Bava was also an artist who put his own unique stamp on the horror film and whose influence continues to be felt in film today.  With Blood and Black Lace, Bava helped to launch the entire giallo genre and every slasher film that has ever been made owes a debt to Bava’s Bay of Blood.  While Bava’s final work as a director, 1977’s Shock, may not be as well-known as some of his other films, it’s one of his best works and it’s certainly worthy to be listed with the rest of Bava’s oeuvre.

Shock is a haunted house film.  Dora (played by the great Daria Nicolodi) is a mentally fragile woman who is still in the process of recovering emotionally from the suicide of her first husband.  When Dora marries Bruno, an apparently well-meaning airline pilot (but he’s played by John Steiner and anyone who loves Italian exploitation knows that it’s always dangerous when Steiner shows up as a sympathetic character), it briefly appears that Dora’s life might be getting back on the right track.

Except, of course, for the fact that, whenever Bruno leaves the house, Dora gets the feeling that she’s not alone.  Things fall off of shelves.  A razor blade suddenly shows up hidden between the keys of a piano.  Worst of all, her young son Marco (David Collin, Jr.) starts to act differently.  When he’s not sneaking into the master bedroom and using a kitchen knife to chop up Dora’s underwear, Marco is doing things like aggressively wrestling with his mother and cutting Bruno out of all the family pictures.

Dora quickly becomes convinced that the spirit of her first husband is both haunting the house and possessing young Marco.  Bruno, meanwhile, worries that Dora may be having another nervous breakdown.  As for Marco, he’s busy spying on Bruno and Dora while they’re sleeping and calling them dirty names under his breath… 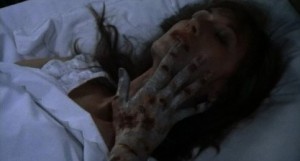 The plot of Shock will probably not shock anyone who has seen a haunted house film but one doesn’t really watch a Bava film for its plot.  With a Bava film, the story is never quite as important as the way that Bava tells it.  Working in the years before CGI, Bava was a master at creating special effects that were cheap, simple, and ultimately very effective and that’s what Bava does here.  In perhaps the film’s most effective (and famous) moment, Marco seems to transform into Carlo right before our eyes.  It’s pretty easy to figure out how Bava achieved the effect but that doesn’t make it any less of a frightening moment.

However, the main reason that this film works is because of Daria Nicolodi.  Bava was never known for being a great director of actors but, for this film, he managed to capture one of the best performances in the history of horror cinema.  In the role of Dora, Nicolodi is like an exposed nerve.  It’s impossible not to sympathize with her, even if you’re never quite sure just how sane or insane that she may actually be.  Watching Nicolodi’s performance in this film, it’s hard not to regret that, in the years to come, her talent would be so overshadowed by both her former boyfriend Dario Argento and their daughter, Asia.

By all accounts, Mario Bava was in failing health during the making of Shock (and perhaps that’s why he showed so much empathy for the similarly frail Dora) and he was aided, in the making of the film, by his son Lamberto Bava (who would later become a well-known horror director himself).  Sadly, Mario Bava died three years after completing Shock and the film has never quite gotten the amount of attention that it deserves.  Shock is a fitting end to a brilliant career. 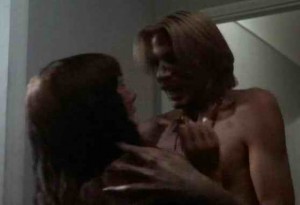