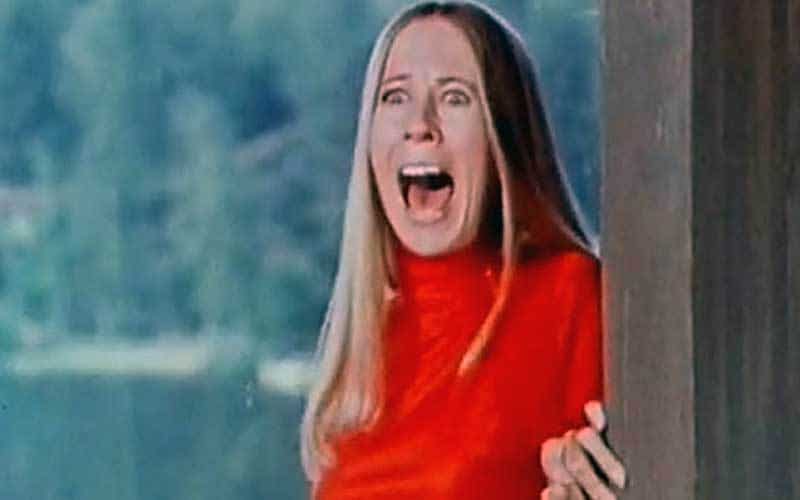 Welcome to Salem Academy, an exclusive all-girl’s college where students learn all the basic subjects, along with taking courses in art and human sacrifice!

Salem Academy is overseen by the feared and intimidating Mrs. Williams (Jo Van Fleet), who keeps a close eye on her students and tries to make sure that they aren’t distracted or corrupted by any outside influences. However, not even Mrs. Williams can keep Martha Sayers (Terry Lumley) from fleeing the school and going to her sister’s house in Los Angeles. When Martha’s sister, Elizabeth (Pamela Franklin), returns home, she discovers that Martha has been hanged. The police say that it was suicide. Elizabeth believes that it’s something else.

So, Elizabeth does what any vengeance-seeking sister would do. Using an assumed name, she enrolls in Salem Academy herself. She meets and befriends three other students (played by Kate Jackson, Jamie Smith Jackson, and Cheryl Ladd). She gets to know two rather suspicious teachers, Prof. Delacroix (Lloyd Bochner) and Dr. Clampett (Roy Thinnes). She also manages to raise the concerns of Mrs. Williams, who doesn’t like the fact that the new girl keeps asking so many questions about why so many students at Salem Academy have died recently.

Still, Elizabeth continues to investigate. Perhaps the secret can be found in a mysterious painting that she comes across, one that appears to be of Martha? Perhaps the teachers and the students know more than they’re telling. But who can Elizabeth trust?

A made-for-television film from 1973, Satan’s School For Girls is frequently as silly as its name. This film is totally product of the time in which it was made, from the dialogue to the hairstyles to the fashions to the ending that you’ll see coming from a mile away. At the same time, that’s also why this film is a lot of fun. It’s such a product of its time that it doubles as a time capsule. Do you want to go back to 1973? Well, go over to YouTube and watch Satan’s School For Girls. Fortunately, the film, which was produced by Aaron Spelling and directed David Lowell Rich, seems to understand just how ludicrous it is and it totally embraces both the melodrama and the silliness of its plot.

It’s just a really fun movie so check it out and be sure not to be late for class!