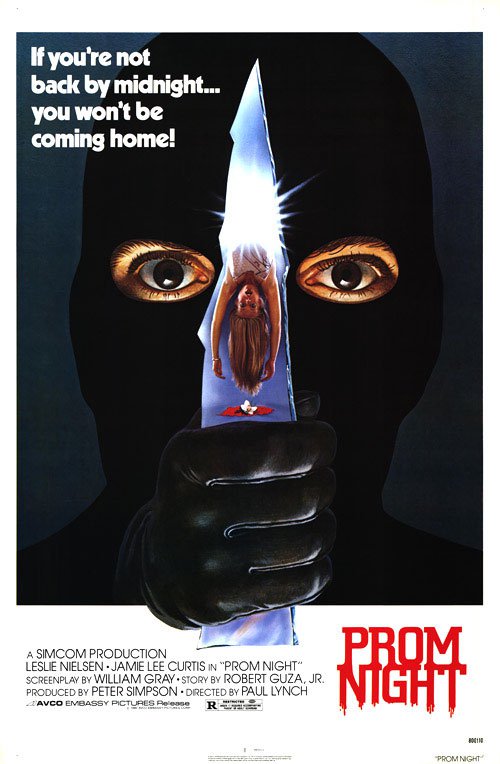 The original 1980 Prom Night (not to be confused with the terrible remake that came out a few years ago)  is an old school slasher film, one of the many that came out in the two years immediately after Halloween.  It even stars the star of Halloween, Jamie Lee Curtis.  Prom Night also stars a lot of Canadians because it was one of the many low-budget B-movies that was made in Canada in the early 80s.  Apparently, Canada was offering tax breaks to film companies willing to shoot up north.  Several web sites have said that the setting is obviously Canadian but I couldn’t really tell.  Of course, I’m from Texas.  Anything above Arkansas looks like Canada to me.

Plotwise, the film is pretty much your traditional old school slasher film.  There’s a terrible tragedy in the past, an innocent man is blamed for it, and ten years later, teenagers end up getting killed at some communal event.  In this case, the tragedy is the death of a young girl who is killed during a truly demonic game of tag.  The children responsible for her death lie about what happened and a disfigured drifter is convicted and imprisoned for her murder.  As for the communal event, in this case, it’s prom night.  The killer stalks the prom, which is what I suggested my classmates call our prom way back when.  They disagreed and that’s their loss.  The Killer Stalks The Prom would have been a prom to remember.

1) As with all old school slasher films, it’s interesting to see just how much of the early products of this all-American genre borrowed from the Italian giallo genre.   Everything from the elaborate, past tragedy to the black gloves worn by the killer to the attempts to keep audiences guessing who the killer actually is to even the supporting character of the burned out cop simply screams giallo.  The main thing that the Americans brought to the giallo format was the idea of having the murders revolve around a previously innocent gathering or holiday.

2) Especially when compared to recent “slasher” films, Prom Night is a relentlessly grim amd dark film.  Prom Night’s killer doesn’t waste any time with comic relief or one-liners.  He’s too busy savagely killing people.  And our victims aren’t the usual collection of bimbos and soulless jocks.  No, this is the type of movie where even the token virgin ends up getting her throat ripped out with a gigantic shard of glass.  There’s not a lot of deaths in Prom Night, just six.  But they all hurt.

3) I usually just think of Jamie Lee Curtis as the crazy woman selling Activia on Lifetime but this movie shows that she’s actually a pretty good actress.  Even working with a script that isn’t exactly full of brilliant dialogue or multi-faceted characters, Curtis is a sympathetic, likable, and most of all, believable heroine (which is all the more remarkable when you consider that she, like everyone else in this film, appears to be far-too old to still be worrying about the prom).  She even manages to make the film’s ending rather touching and even poignant.  (Of course, it helps that the identity of the murderer is actually something of a surprise.)  And how many slasher films can you say that about?

4) Prom Night is as much about tacky — yet insanely catchy — disco music as it is about spilling blood.  Seriously, if I owned the soundtrack to this film, I would listen to it 24/7 for two years straight.  I’d force all of my friends to listen to it too and eventually we’d all go insane and just spend the rest of our lives wandering around going, “Prom night!  Everything is alright!”

5) Leslie Nielsen has a serious role in this film, playing Jamie Lee Curtis’s father.  He also happens to the principal of the high school and you better believe that he’s not going to let anyone ruin this prom.  Nielsen’s line readings — which are just as deadpan and overdramatic as when he’s doing comedy — simply have to be heard to be believed.

6) One last thing — Prom Night showcases what has to be the most believable, cheap, and tasteless prom ever put on film.  The theme is Disco Madness and the students are all very chic in that way that even they know will be painfully dated in another two years.  Indeed, this is one of the rare films that understands that the perfect prom is nothing less than an unintentional camp spectacular.  For someone like me who, as the result of seeing too many episodes of Saved By The Bell: The New Class, grew up with an unrealistic expectation of what the senior prom would be, the original Prom Night remains a refreshing breath of fresh air even 30 years after it was made.

And always remember: “Prom Night!  Everything is all right…”