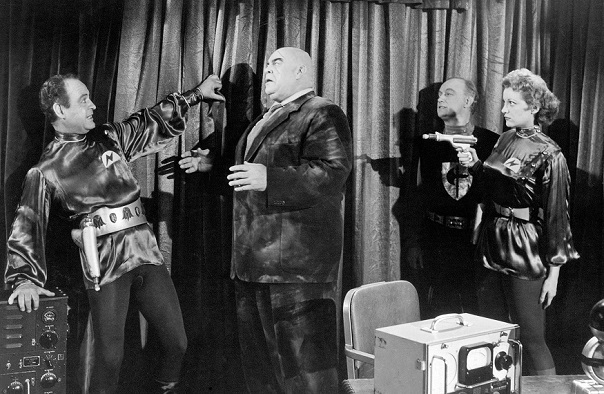 We’ve all heard the accusation.

Ed Wood’s Plan 9 From Outer Space is the worst film of all time.

Well, you know what? Everyone is wrong! Plan 9 From Outer Space may be a low-budget film with some …. well, awkward performances. And the script may have some odd lines. And the story might not make any sense. And yes, there’s a scene in an airplane where the doorway to the cockpit is clearly a shower curtain. And yes, the spaceships are paper plates with strings attached. And Criswell’s campy narration makes no sense. And the guy that they brought in to serve as a stand-in for Bela Lugosi was clearly too tall and too young to be credible in the role. And the whole thing about bringing the dead back to life to keep Earthlings from developing the Solarnite bomb …. well, who knows where to even start with that? And….

Wait, where was I?

Oh yeah. Plan 9 From Outer Space. It’s not that bad, I don’t care what anyone says.

Here’s the thing with Plan 9. It’s about as personal an expression of an American director’s vision as we’re ever likely to get. Ed Wood was a pacifist who wanted to end the arm races. His way of trying to spread world peace was to make a movie about aliens so concerned about mankind’s warlike tendencies that they raised the dead. Somewhat subversively, Ed Wood makes it clear that he’s on the side of the aliens from the beginning. When the alien Eros explains that humans are about to build a bomb that can blow up sunlight and destroy the universe, the humans aren’t horrified. Instead, they’re intrigued. Eros says that humans are stupid and immature. The hero of the film promptly proves Eros to be correct by punching him out.

And so, the aliens fail. Even though they brought Tor Johnson, Bela Lugosi, and Vampira back from the dead, they still fail to change the terrible path of human history. Plan 9 From Outer Space is not just a weird sci-fi film. It’s a sad-eyed plea for peace and understanding. It’s a film that possesses it’s own unique integrity, one that sets it apart from all other cheap sci-fi films.

Of course, it’s also a lot of fun to watch on Halloween. Watch it, won’t you? And remember that Ed Wood, above all else, tried his best.