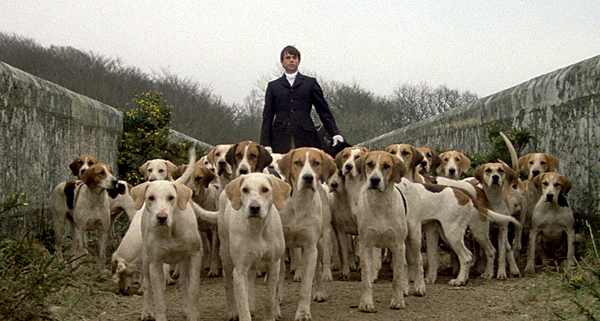 Originally, it had been planned that the Omen franchise would be made up of six or seven films and that each movie would check in on another year in the life of Damien Thorn, a bit like an apocalyptic version of Boyhood.  However, after Damien: Omen II failed to perform up to expectations, plans were changed.

Instead of continuing the story of Damien’s adolescence, the 1981 film Omen III: The Final Conflict jumps straight into Damien’s adulthood.  Now 32 years old and played by a very young (and handsome) Sam Neill, Damien Thorn is now the CEO of Thorn Enterprises.  With the help of his loyal assistant Harvey Dean (Don Gordon), Damien has become one of the most popular and powerful men on the planet.  Thorn Enterprises, having followed Paul Buhler’s scheme from the second film, is now responsible for feeding a good deal of the world.  Damien is seen as being a humanitarian and a future President.  When the U.S. Ambassador to the United Kingdom reacts to spotting a black dog in the park by committing suicide, Damien is appointed to the position.

(Needless to say, everyone in London is happy to see Damien.  Nobody says, “I just hope you don’t end up going crazy and dying a violent death, like everyone else in your family and immediate circle of acquaintances.”  But they’re probably thinking it…)

Now in London (and also appointed to be head of the United Nations Youth Organization, which just goes to show that your crazy uncle is right and the United Nations is a conspiracy), Damien pursues a rather creepy romance with journalist Kate Reynolds (Lisa Harrow) and makes plans to prevent the Second Coming by killing every single baby born on the morning of March 24th.  (But Harvey’s son was born on March 24th — wow, could this lead to some sort of conflict?)

Meanwhile, a group of priests (led by an embarrassed-looking Rossanno Brazzi) have recovered these damn daggers of Megiddo and are now all attempting to assassinate Damien.  Unfortunately, none of them are very good at their job.  (“You had one job, Father!  One job!”)

The Final Conflict is not that good.  It’s boring.  The plot is full of holes.  For instance — and yes, these are SPOILERS — why have we sat through two movies listening to characters insist that Damien has to be stabbed by all seven of the daggers when apparently, just one dagger will do the job?  Why, after being told that Jesus is going to be reborn as a child, does he then appear as an adult at the end of the film?  And finally, why does nobody ever seem to find it strange that everyone that Damien knows end up suffering a freak accident?

I will say that there are two good things about The Final Conflict.

First off, Sam Neill gives a good performance as Damien Thorn.  He’s handsome, he’s charismatic, and he’s not afraid to be evil.  But, unfortunately, Damien’s just not that interesting of a character anymore.  In the first Omen, he was interesting because he was an evil five year old.  In the second Omen, he was at least occasionally conflicted about his role.  In the third Omen, Damien is just evil and evil without nuance is boring.

Secondly, there’s that sequence where Damien’s followers go after the babies born on March 24th.  Oh my God, that was so disturbing and it was one of the few moments when The Final Conflict actually became horrific.

Otherwise, The Final Conflict is a thoroughly forgettable sequel to a memorable film. 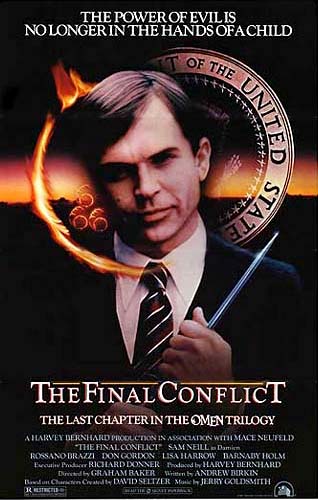