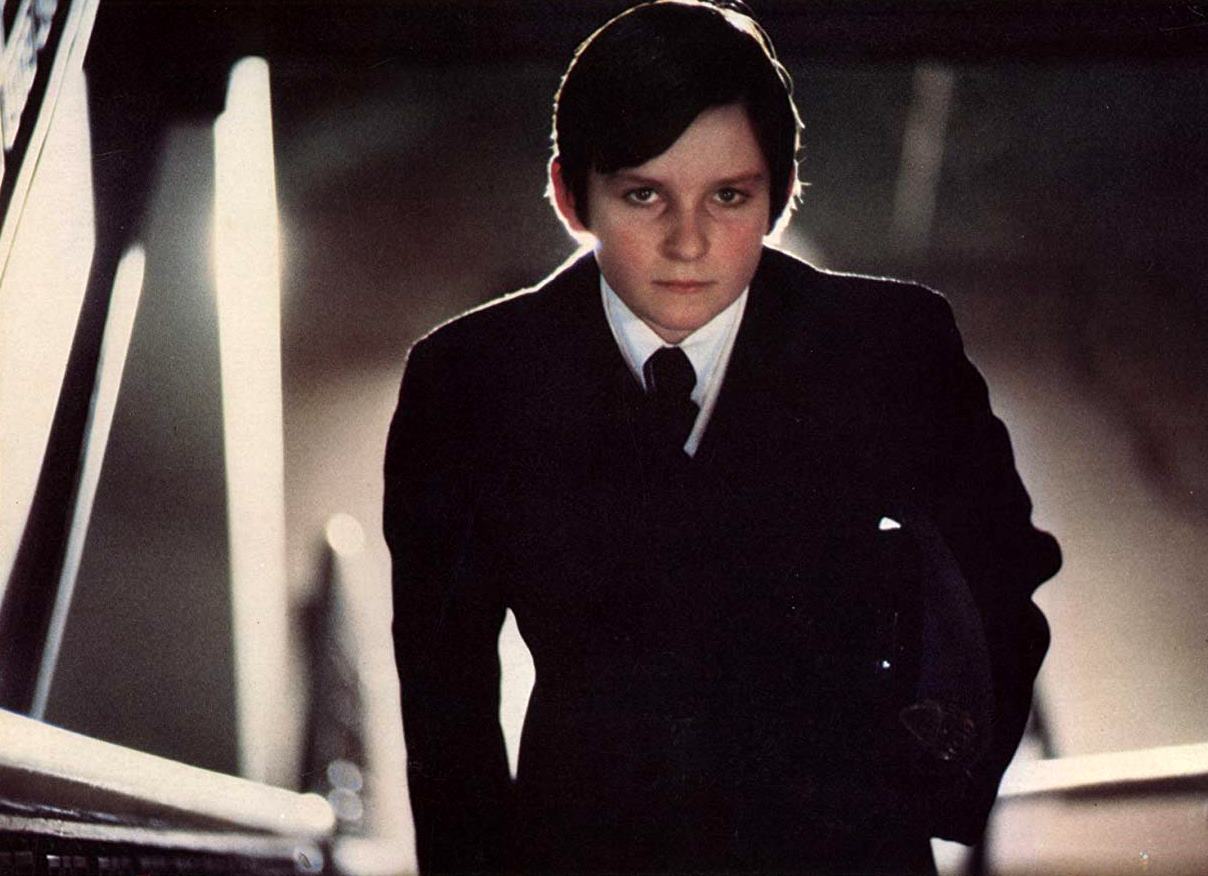 Damien: Omen II takes place 7 years after the end of the original Omen.  Antichrist Damien Thorn (now played by Jonathan Scott-Taylor) is now 12 years old.  He lives with his uncle Richard (William Holden) and Richard’s 2nd wife, Ann (Lee Grant).  His best friend is his cousin Mark (Lucas Donat).  In fact, the only problem that Damien has is that his great-aunt Marion (Sylvia Sidney) can’t stand him and views him as a bad influence.  Fortunately, as usually seems to happen whenever someone puts an obstacle in Damien’s life, there’s always either a black dog or a black crow around to help out.

Damien and Mark are cadets at a local military academy where Damien deals with a bully by glaring at him until he falls to the ground, grabbing at his head.  In history class, Damien shocks his teacher by revealing that he knows the date of every battle ever fought.  Damien’s new commander, Sgt. Neff (Lance Henriksen), pulls Damien to the side and tells him to stop showing off and to quietly bide his time.

Meanwhile, Richard is busy running Thorn Industries.  One of his executives, Paul Buhler (Robert Foxworth), wants to expand Thorn’s operations into agriculture but his plans are opposed by Richard’s executive vice president, Bill Atherton (Lew Ayres), who considers Paul to be unethical.  However, during an ice hockey game, Bill falls through the ice and, despite the efforts of everyone to break through the ice and save him, ends up floating away.  Paul is promoted and pursues his plans to make money off of world famine.  In between all of this, Paul finds the time to speak to Damien and tell him that he has a great future ahead of him.

Along with Thorn Industries, Richard also owns the Thorn Museum in Chicago.  The museum’s curator is Dr. Charles Warren (Nicholas Pryor) who was a friend of the archeologist Karl Bugenhagen (Leo McKern) who, in the first film, revealed that not only was Damien the antichrist but that the only way to kill him was by stabbing him with the Seven Daggers of Meggido.  Dr. Warren is also friends with Joan Hart (Elizabeth Shepherd), a reporter who both knows the truth behind Bugenhagen’s death and who has also seen an ancient cave painting that reveals that the Antichrist looks exactly like a 12 year-old Damien Thorn.

Much as in the first film, just about everyone who comes into contact with Damien ends up getting killed in some odd and grotesque way.  Crows peck out eyes.  Trucks run over heads.  One unfortunate victim is crushed between two trains.  Another is chopped in half by an elevator cable.  At times, Damien: Omen II feels less like a sequel to The Omen and more like a forerunner to Final Destination.

Damien: Omen II is one of those films that I like despite myself.  It’s bad but it’s bad in a way that only a film from the 1970s could be and, as such, it has some definite historical value.  The script is full of red herrings, the acting is inconsistent, and the film can never seem to make up its mind whether Damien is pure evil or if he’s conflicted about his role as Antichrist.  As I watched the film, I wondered why the devil could so easily kill some people but not others.

And yet, Damien: Omen II is so ludicrous and silly that it’s undeniably watchable.  If the first film was distinguished by Gregory Peck’s defiant underplaying, the second film is distinguished by the way that William Holden delivers every line through manfully clenched teeth.  Everyone else in the cast follows Holden’s lead and everyone goes so far over-the-top that even the most mundane of scenes become oddly fascinating.

For me, the film is defined by poor Lew Ayres floating underneath that sheet of ice while everyone else tries to rescue him.  On the one hand, it’s absolutely horrific to watch.  I’m terrified of drowning and, whenever the camera focused on Ayres desperately pounding on the ice above him, I could barely bring myself to look at the screen.  But, at the same time, we also had William Holden screaming, “OH GOD!” and Nicholas Pryror enthusiastically chopping at the ice with a big axe and dozens of extras awkwardly skating across the ice.  Somehow, the scene ended up being both horrifying and humorous.  It should not have worked but somehow, it did.

And that’s pretty much the perfect description of Damien: Omen II.  It shouldn’t work but, in its own way, it does. 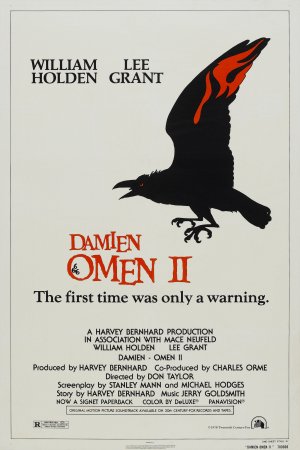