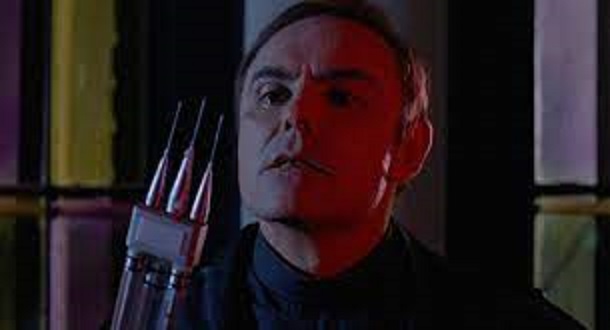 Welcome to the end of the world.

To be honest, it’s a bit of a struggle to say what exactly the 1992 film Hellmaster was actually about but I think it definitely had something to do with the end of the world.  John Saxon plays Prof. Jones, a sadistic eugenicist who, in the late 60s, developed a drug that he claimed would — I kid you not — “cure homelessness.”  Apparently, the drug would make the homeless so strong that they would be able to build a house or something.  Anyway, a reporter (David Emge, best known as the helicopter pilot in the original Dawn of the Dead) discovered what Jones was doing and that the drugs were actually turning the homeless into mind-controlled zombies.  Jones responded by murdering the reporter’s wife and then vanishing.

Are you following the story so far?

20 years later, the reporter is having nightmares about the homeless so he decides to start hanging out around the Kant Institute for the Gifted.  We’re told that the Kant Institute is a college.  There only appears to be one professor and a handful of students, the majority of whom appear to be in their early 30s.  I’m not really sure what’s being taught at the school.  (The only class we see features two white people debating whether or not Malcolm X hated the homeless.)  One of the students, Shelley (Amy Raasch), is apparently clairvoyant and she keeps having visions of the school’s chapel bursting into flames.

Meanwhile, there are shots of an old church bus driving down various deserted roads.  “Have a nice day” is written across the cross that hangs on the front of the bus.  On top of the bus, someone’s painted a smiley face.  The bus itself is occupied by four deformed followers of Prof. Jones.  Apparently, they’ve spent the last 20 years driving around the country and killing people.  One of them is dressed like a nun and carries several hypodermic needles.  They come across a stalled motorist and promptly kill him.  The man’s daughter (Sarah Barkoff) escapes and flees to the nearby Kant Institute.

It turns out that the bus is also heading to the Kant Institute!  Eventually, Prof. Jones pops up and explains that it took God six days to create the world but Jones believes that it will only take him one night to transform the world into Hell.  Why does Jones want to do this?  That’s not really clear.  Actually, it’s not even clear how showing up at the Kant Institute will even help Jones accomplish that goal.

Anyway, the rest of the movie is basically Shelley and the reporter and a handful of friends attempting to not get transformed into zombies by Prof. Jones.  This is easier said than done because, as we quickly discover, everyone in this movie is an idiot.

Hellmaster is one of those low-budget horror films that shouldn’t work and yet somehow, it does.  Yes, the plot makes absolutely no sense and, with the exception of genre vets Saxon and Emge, the performances are almost all terrible.  But no matter!  At its best, the film — which is full of dark hallways and deserted roads and twisty camera angles — achieves a dream-like intensity.  The zombies, with their hypodermic needles and their joyful savagery, are genuinely creepy and John Saxon is properly menacing as Prof. Jones.  It’s a relentless film, one that leaves you feeling as if anyone can die at any time and, when they do die, it’s often in the most macabre ways possible.  A crippled student is beaten to death with his own crutch.  Another is doused with acid.  And you may be asking yourself, “But why was there a big vat of acid just sitting around?” but oddly, it works within the surreal dream logic of the film.  It makes no sense and yet, it happens.  If anything, the lack of a coherent plot and the low-budget aesthetic help this film create and maintain its nightmarish atmosphere.

For all of its flaws, Hellmaster is a thousand times more effective than you might expect.