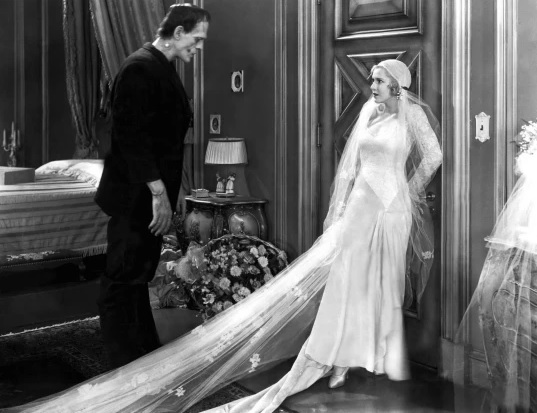 No, not Victor von Frankenstein, though he certainly suffered greatly for playing God.  How much he suffered depends on which version of the story you see or read.  If you’ve read the book, you know that Victor lost his family, his love, his mentor, his best friend, and eventually his own life.  Victor is usually a bit more resilient in the films.  For instance, if you go by what we’ve seen in the Hammer films, Baron Frankenstein was pretty much indestructible.  The only thing he lost was his sanity, sacrificed as he continually insisted on making the same mistake over and over again.

And when I say “Pity poor Frankenstein,” I’m not referring to the monster either, though he certainly deserves some sympathy as well.  The monster never asked to be brought to life.  He may have destroyed castles and killed people and tossed little girls into a lake but Frankenstein’s Monster rarely seemed to mean any harm.  He was just scared, confused, and often abused.

Instead, when I say pity poor Frankenstein, I’m referring to the 1931 film.  It’s a classic horror film, one that, after 85 years, still holds up remarkably well.  It’s probably the best directed of all the Universal horror films, with James Whale bringing his own dark wit and idiosyncratic style to the film.  As was often the case with films of the era, some of the performances are better than others but no one can find fault with Boris Karloff’s definitive portrayal of Frankenstein’s monster.

And yet, for a lot of filmgoers, Frankenstein will always just be that movie where Colin Clive rants, “It’s alive!  IT’S ALIVE!”  That scene is justifiably famous but it always bothers me when it shows up as an isolated clip, devoid of context.  I’ve seen it used in documentaries.  I’ve seen it used on snarky news programs where it’s almost always used to poke fun at someone.  I’ve even seen it used in a car commercial.

When you watch this scene without any context, it’s easy to smirk.  You might assume that the entire film is Colin Clive ranting and Dwight Frye snorting.  It’s only after you’ve seen the entire film that you appreciate Clive’s performance.  Throughout the entire first part of the film, Colin Clive plays Henry Frankenstein as being unstable but also rather withdrawn.  He’s almost vampiric, hiding inside of his laboratory all day and only coming out at night to rob graves with the hunchbacked Fritz (Dwight Frye).  He’s almost a recluse, which is why his fiancée, Elizabeth (Mae Clarke) asks his best friend, Victor (John Boles), and his mentor, Dr. Waldman (Edward Van Sloan, who also played Van Helsing in Dracula) to check in on him.

When the monster does move its hand and Clive shouts, “It’s alive!,” it’s the first sign of true emotion that Frankenstein has shown through the entire film.  He’s spent a lifetime dreaming of playing God and, now that he has, it overwhelms his mind.  Clive sees something that defies all reason and he has a breakdown.

I have to admit that, for me, the first third of the film drags.  That may not have been as much of a problem in 1931, when audiences were seeing the story for the first time and didn’t already know what was going to happen.  In 1931, the slow start undoubtedly helped to build up suspense.  But, when seen today, there is a temptation to say, “Get on with it!”

(Of course, I tend to say that with all Frankenstein movies, because I’m impatient and there always seems to be an endless number of scenes people digging graves and stealing brains until we finally get to the good part.  If anything, the 1931 Frankenstein doesn’t take as long to get going as some of the later Hammer films, many of which treated the monster as almost an afterthought.)

Fortunately, Frankenstein does get on with it.  When the monster finally comes to life and Colin Clive has his moment of divine madness (“This is what it feels like to be God!”), the film shifts in tone.  If anything it becomes a bit of a dark comedy.  Henry (who is noticeably more subdued after his outburst, a bit like a drug addict who is only now starting to come down after being awake for a week) and his friends now have to not only hide the monster but try to figure out how to deal with it.  Every few minutes, it seems like another villager or Frankenstein relative is dropping by the castle.  Having created life, Henry now has no idea what to do with it.  Being God isn’t as easy as it looks.  Having created life, all Henry can now do is keep the doors locked and attempt to go back to living a relatively normal life.  In this case, that means preparing for his wedding.

It’s not until the sadistic Fritz torments the frightened monster with a torch that this horror classic truly becomes a horror film.  And it’s significant that the true monster here is not Frankenstein’s Monster but instead Fritz.  When the monster kills Fritz, he does it out of self-defense.  When he strangles Dr. Waldman, it’s because Waldman was about to cut into him with scapel.

And then there’s the little girl, who shows the Monster that flowers can float.  How that scene must have shocked audiences in 1931!  It’s still shocking today, because we’re not used to children dying in movies, not even horror movies.  Of course, the monster doesn’t mean to hurt the girl.  The girl is the first person to show the monster any sort of kindness.  It’s just that the monster doesn’t understand that the girl won’t float like the flowers.

The sequence where the girl’s father carries her body into the town square is perhaps one of the most devastating ever filmed.   Not only does the father’s grief contrast with the happiness of the villagers but it also contrasts with the attitude of Henry and Elizabeth who are busy preparing from their wedding, ignorant of what Henry’s creation has done.

Or, at least, they are until the monster confronts Elizabeth in her bedroom.

It all ends, of course, with a confrontation between Henry and his monster and a windmill being set aflame.  There’s also a happy coda that, in the best tradition of horror, feels a bit tacked on.  Fortunately, those of us who know our film history know that the story didn’t end with this film.  It continued with The Bride of Frankenstein and a host of other sequels.

As for Frankenstein, it’s a classic and it’s pretty much required viewing for any film lover.  Boris Karloff’s performance as the confused and often child-like monster is both poignant and menacing.  Watching the film, you just wish that the world had been nicer to him.

(Then again, that approach didn’t exactly work out well for the little girl with the flowers…)

Frankenstein is so much more than just Colin Clive shouting, “It’s alive!”  If you haven’t actually sat down watched the entire movie from beginning to end, you owe it to yourself to do so today. 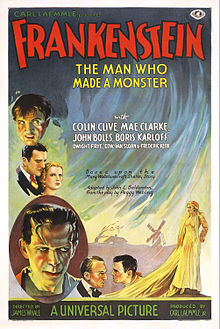