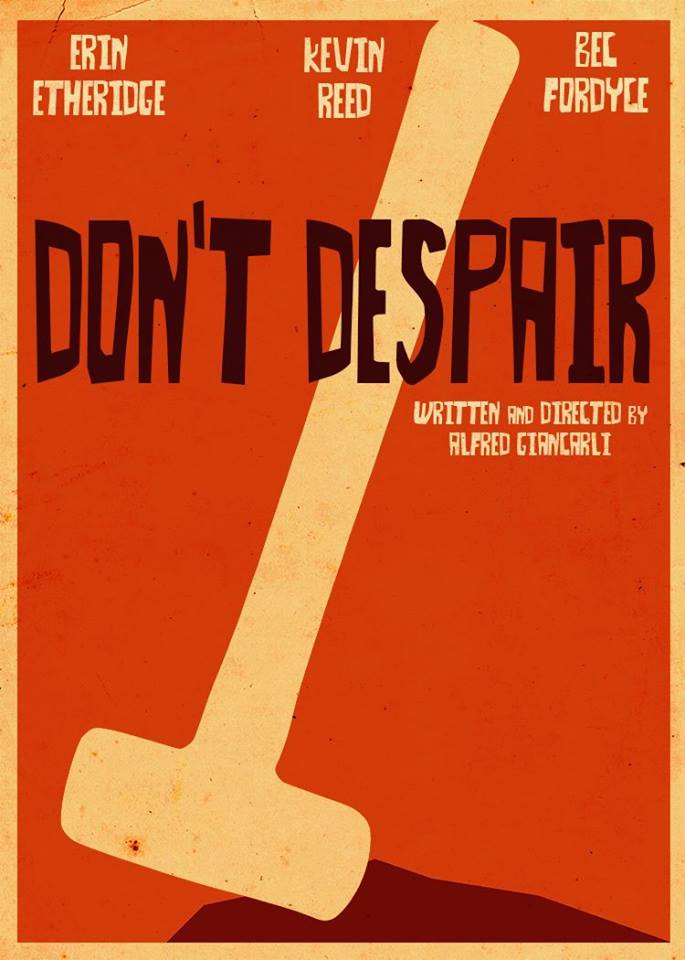 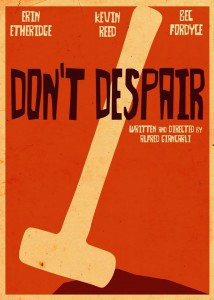 Last night, I was fortunate enough to finally get a chance to sit down and watch the short horror film, Don’t Despair.

Don’t Despair opens with shots of urban decay.  We’re in a car but we don’t know who is driving.  We’re looking out a window at the landscape passing us by but we’re not quite sure where we are.  We pass by dying trees, abandoned buildings, and gray, impersonal factories, all signs of a slowly dying society.  And as we look at these images, we hear a woman speaking, her voice void of affectation and yet still oddly hypnotic.  It’s a wonderfully doom-laded introduction, one that perfectly sets up the ominous atmosphere for the story that follows.

A man and a woman are sitting across from each other in a booth.  Her name is Rachel (Erin Etheridge) and we quickly identify her voice as the one we heard over the shots of the passing landscape.  Rachel makes vague references to an online forum that she claims to be in charge of.  From the minute we see Rachel, we know something is off about her.  Her eyes are a little too intense and her smile is just crooked enough to let us know that we probably do not want to know what’s going on underneath the surface.

Across from her is William (Kevin Reed).  With his beard and his glasses and his overly precise way of speaking, William is a type that will be recognizable to anyone who has ever had the misfortune to be hit on by an overage hipster while enjoying a night out.  William says that he’s never actually met anyone from the Forum before.

They push an old men’s magazine between them.  As we listen to their increasingly intense conversation, we come to understand that the magazine once belonged to a serial killer and that these two are collectors of murderous artifacts.  They talk about the killer and discuss his most infamous murder.  They describe it as being his masterpiece and we see brief flashes of what could be the crime.  As we do, we realize that we recognize the location.

Finally, Rachel asks William to follow her.  She stands up.  William stands up.  Rachel leaves.  William follows.  The rest of the movie deals with where she leads him and what they do once they get there.

Directed by Alfred Giancarli, Don’t Despair may only be 16 minutes long but it carries a lot of power in those 16 minutes.  From beginning to end, Giancarli creates an atmosphere of dread and doom, the type that will inspire you to look a little closer at each shadow, just to make sure that there’s nobody hiding in the darkness.  Giancarli makes great use of the film’s industrial locations, especially during the film’s nightmarish conclusion.  Erin Etheridge and Kevin Reed also deserve a lot of credit, playing characters who are creepy precisely because they are so recognizable.  Anyone who has ever spent any time online will immediately realize that they’ve met real-life versions of both Rachel and Kevin.

Don’t Despair is a nicely done mood piece.  You can watch it by clicking here!