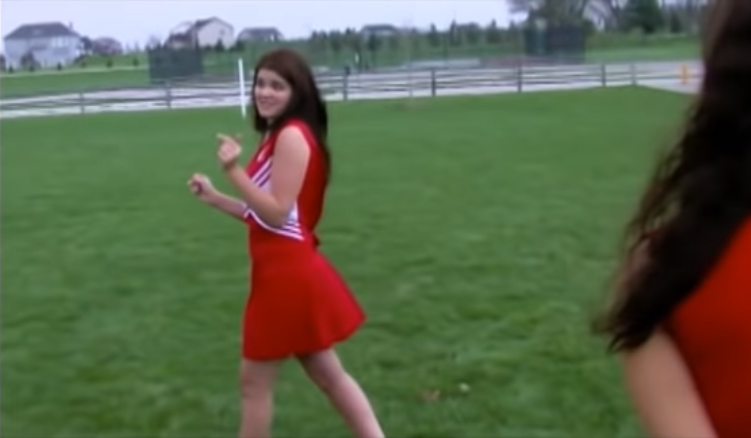 Hey, what do you think this film is about?

Anyway, Tiffany (Inga Draper) is in charge of the cheerleading squad at this high school or college and she basically runs it like a dictator. She tells everyone what they can and cannot do. For instance, she orders Robin (Maria Perez) to starve herself, even though Robin is not overweight at all. Robin finds herself being tempted away from the cheerleaders by a group of body acceptance activists who are referred to as being “Pretty Intelligent Girls” or …. well, you can figure out the acronym for yourself. When cheerleaders start to turn up dead, the Pretty Intelligent Girls are the number one suspects but could it be someone else?

Who knows? This film is a difficult one to sit through, largely because it was shot on video with amateur actors, fluorescent lighting, and natural sound. That’s another way of saying that Die Cheerleader Die is essentially a 90-minute YouTube video and it’s perhaps appropriate that that’s where I saw it. There’s no suspense, the kills aren’t particularly interesting, and the whole thing just gets kinda boring pretty quickly.

But, I don’t like being totally negative in any review so I am going to point out two good things. Number one, Inga Draper gave a pretty good performance as Tiffany. She was like every aspiring dictator that you ever knew in high school. Secondly, regardless of whether the film is any good or not, you can’t deny that it actually got made. The filmmakers may have made some poor production choices but they still got their film made and, 11 years later, it’s still being watched and reviewed. That’s more than most people who have, at some point, said, “I’m going to make a movie!” have accomplished.

Finally, cheerleaders always seem to be at a disadvantage in horror movies. I’ve always found that pretty strange because most of the cheerleaders that I’ve known were tough-as-nails athletes who, because they were constantly having to deal with snarky comments and pervy flirtation, knew how to take care of themselves. In a real life horror movie, the cheerleaders would probably be the only ones to survive.