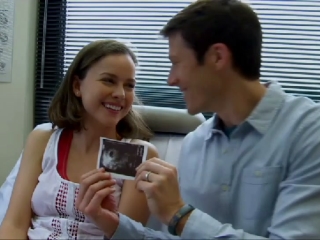 Devil’s Due is a lot better than you may think.

Yes, it’s tempting to judge Devil’s Due without giving it fair a chance.  January is traditionally the time of year when the studios dump all of their most hopeless films into theaters, hoping to make a quick buck while more discriminating audiences are distracted by the Oscar nominees.  Found footage horror movies usually suck.  The commercials make Devil’s Due look like little more than just the latest film to rip-off Paranormal Activity and The Last Exorcism.  On top of all that, Devil’s Due wasn’t screened for critics and we know that’s usually a bad sign.

So yes, there’s a lot of reasons to be skeptical about Devil’s Due but I’m here to tell you to put your skeptism aside.  Devil’s Due is a surpisingly intelligent horror film, one that totally defied my expectations.

If you’ve seen any of the commercials then you already know the basic plot.  Zach (Zach Gilford) and Sam (Allison Miller) are newlyweds.  While on their honeymoon in the Dominican Republic, they have both a frightening encounter with a fortune teller (who repeatedly tells Sam that “They’ve been waiting for you,”) and a seemingly more pleasant encounter with a friendly taxi driver who takes them to an underground nightclub.  Though Sam and Zach wake up the next morning with no memory of when they left the club, we know (via Zach’s still-running camera) that a ritual was performed while Sam was passed out drunk.

Returning home to New Orleans, Sam is shocked to discover that, despite being on the pill, she is now pregnant.  Zach and his family are so excited about the idea of Zach becoming a father that nobody seems to notice that Sam is far less enthusiastic.  Not only does this mean that she might have to put her education and career on hold, but she also soon starts waking up with bruises on her stomach and having nosebleeds.  She flies into unexplained rages, at one point smashing the windows of a van that pulled out in front of her.  Despite being a vegetarian, Sam starts to crave raw meat.  While everyone else just assumes that she’s having a difficult pregnancy, Sam becomes convinced that something is wrong with the baby.

Meanwhile, Zach grows increasingly paranoid about the strange men who always seem to be following Sam and him around.  When he spots the cab driver sitting in church, watching as Zach’s neice takes communion for the first time, Zach realizes what the rest of us have already know.

Devil’s Due won’t necessarily win any points for originality but it’s still an effectively creepy and genuinely frightening horror film.  By letting us know, early on, that Sam is carrying the antichrist, the filmmakers are allowed to spend their time developing atmosphere and character (as opposed to building up to a twist that the audience would have seen coming from a mile away).  Zach Gilford and Allison Miller are both very likable and have a lot of chemistry and, as a result, you care about their characters and you continue to hope for the best even when it becomes obvious that they’re destined to experience the worst.

(One need only look at the bland and forgettable lead characters in January’s other found footage film — Paranormal Activty: The Marked Ones — to understand just how important Gilford and Miller are to making Devil’s Due into an effective and memorable film.)

My most common complaint about found footage horror films is that they require you to believe that someone would actually continue to artfully film everything around him even while literally running for his life.  Director Matt Bettinelli-Olpin and Tyler Gillet manage to avoid that problem by using a variety of different methods to create the illusion of “found footage.”  While a good deal of the film is presented as having been filmed by Zach, the directors also make good use of store security footage (one of the film’s best scenes features Sam eating raw meat in a supermarket while a small child looks on in shock and the store’s employees fail to notice) and several stationary cameras that, about halfway through the film, are secretly installed in Zach and Sam’s house.  The use of different cameras not only keeps the film from getting monotonous but it also helps the film to avoid the nausea-inducing shaky cam effect that almost made it impossible for me to watch The Marked Ones.

Finally, Devil’s Due works because it manages to get at the root of a very real and primal fear.  Though it’s not something that we’re encouraged to admit, just the very idea of pregnancy is a very scary thing for a lot of women (this reviewer included).  Beyond the physical changes, there’s the knowledge that, once you’ve given birth, nothing will ever be the same.  There’s a great moment in Devil’s Due in which Sam and Zach argue about whether or not Sam should continue to pursue her career while she’s pregnant.  This is followed, a bit later, by a scene where it’s casually mentioned that Sam’s office has now been transformed into a nursery.  These are very human moments and ones that are full of very real emotions that any woman will be able to relate to.  It’s moments like these that elevante Devil’s Due and make it into a surprisingly effective and intelligent horror film.

Give Devil’s Due a chance.