Bates Motel is back!

During its first season, Bates Motel became something of an obsession for me.  I started out skeptical that a television series that also doubled as a prequel Psycho was a good or even doable idea.  As I watched the wildly uneven first few episodes, I was occasionally intrigued and often frustrated.  I always appreciated Vera Farmiga’s wonderful performance as Norma Bates and, as opposed to a lot of critics, I was always aware of the intelligence that lay underneath Freddie Highmore’s blank-faced interpretation of the teenage Norman Bates.  As the series progressed, I was happy to see the wonderful Nestor Carbonell show up as the enigmatic Sheriff Romero.  Even though his character occasionally seemed like he belonged in a different show, I also loved Max Thieriot as Norman’s bitter but sympathetic older brother, Dylan.  I came to realize that Olivia Cooke’s Emma truly deserved a show of her own where she could solve crimes and worry about finding a date for the prom. Even the oddly named Bradley (Nicola Peltz) came to grow on me, even if I never quite bought the idea that she would have been interested in a someone like Norman.

My main complaint during the first season is that Bates Motel often seemed to be struggling to establish an identity.  A countless number of plots and subplots were introduced and abandoned over the course of just ten episodes.  Was Bates Motel attempting to tell the story of how Norman Bates eventually became a cross-dressing motel keeper and voyeur who murdered women while they showered?  Or was it attempting to tell a story about a single mom who, having moved to a strange new town, now had to struggle to keep her family together? How seriously, I wondered, were we supposed to take the show?  Occasionally, the show seemed to take itself very seriously.  Other times, the show instead seemed to be deliberately over the top, inviting us to laugh along with the melodrama as opposed to at it.

As that first season came to an end, I knew that Bates Motel had a lot of potential but, in order to live up to that potential, it needed to figure out just exactly what it wanted to be.

Well, the second season started last night.  It’s hard to say if Bates Motel has truly figured out what it wants to be but, judging from the premiere, it may be on the right track.

When season one ended, Norman was running home in the rain while his teacher, Ms. Watson, lay dead in her bedroom.  The implication was that the blood-covered Norman had killed her but, as smart viewers know, it probably wasn’t a coincidence that we didn’t actually see him do it.

Season two begins with Norma learning that Ms. Watson has been murdered.  When she asks Norman what happened between him and Ms. Watson, he tells her that he can’t remember anything beyond Ms. Watson offering him a ride back to his house.  Norman and Norma attend Watson’s funeral, where Norman sobs hysterically.  Meanwhile, Bradley — who last season discovered that her murdered father had a mysterious lover named “B” (who, we discover, was Ms. Blair Watson) — jumps off a bridge.

Suddenly, we jump forward four months later.  The motel is thriving, Norma has a new haircut, and her only concern — as usual — appears to be her two sons.  Dylan is spending all of his time down at the marijuana farm while Norman is apparently spending all of his free time either in the basement practicing taxidermy or in the cemetery, visiting Ms. Watson’s grave.  When Norman spots another man standing at Watson’s grave, he is so disturbed that he goes to Sheriff Romero.  Romero then tracks down Norma and tells her that Norman is, essentially, weird.  When Norma confronts Norman about this, Norman admits that he’s been lying.  He does remember going to back Ms. Watson’s house.  He even goes so far as to admit that he watched Ms. Watson undress and that he started feeling “strange.”  However, he also denies having killed her.

If that’s not bad enough, Norma also discovers that work has begun on a new highway that will divert business away from her hotel.  When she goes to a city council meeting to complain, the mayor talks down to her.  That’s his mistake because, as any viewer knows, it’s never a good idea to talk down to Norma Bates.  Norma responds by calling out the entire town on their hypocrisy and giving one of those wonderfully over-the-top speeches that have become her specialty.  Vera Farmiga was nominated for an Emmy for the first season of Bates Motel and, as far as I’m concerned, she earned a second nomination last night.  Seriously, the next time some jerk talks down to you, you just do what Norma Bates does and call him a dick to his face.

The episode’s other major plotline followed Bradley, as she was released from the mental asylum that she was sent to after being rescued from the river.  The friendly and somewhat shallow Bradley of last season appears to be gone.  Instead, she’s been replaced by vigilante Bradley. This is the Bradley who, after considering using her father’s gun to commit suicide, instead uses it to execute Gil, the man who ordered her father’s death.  To be honest, I was initially reluctant about buying the idea that Bradley could so easily become a murderer but then it occurred to me that, out of the main characters, Bradley was one of two who didn’t murder someone last season.  (Or did she?  Check out my first random note below.)

The second season premiere of Bates Motel wasn’t perfect.  I would have preferred to have seen a bit more of Dylan and the show’s most interesting character, Emma, was hardly present at all.  But, on the basis of last night’s episode, it does appear that the show’s creators have figured out that Bates Motel is at its best when it follows the lead of a Vera Farmiga’s sincere yet over-the-top lead performance.  Bates Motel is at its best when it shows the self-awareness to cheerfully embrace its melodramatic potential. 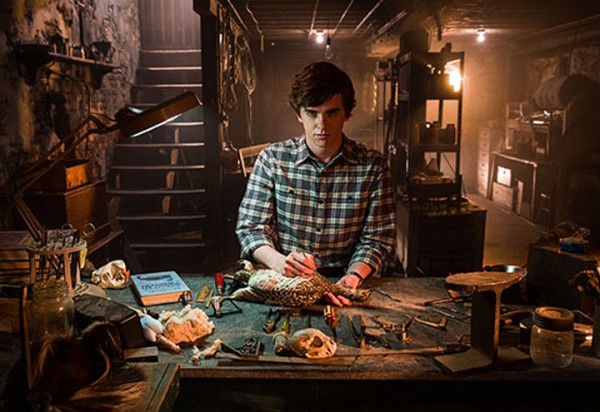