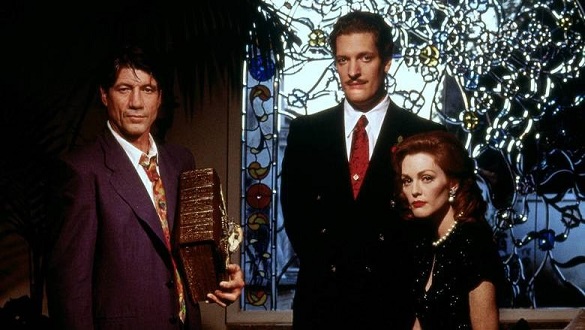 It’s a world that, at first, seems very familiar.  World War II is over and, even as America faces the future with refreshed optimism, the streets of Los Angles remain mean and dangerous.  There are gangsters.  There are rich men plotting to make themselves even richer.  The police are corrupt.  The shadows are dark.  It’s a world where one lone man, a private detective man named Howard Philip Lovecraft (played by Fred Ward), faces the world with his own personal code of honor.

Of course, it’s also a world that is, in many ways, different from ours.  For one thing, everyone in this version of Los Angeles knows that magic and monsters are real.  Hitmen regularly use voodoo dolls to take out their enemies.  Houses are built with cheap zombie labor.  It’s a world where you may not want to see a gremlin in your house but you’re not going to be particularly stunned if one shows up.  It’s a world where everyone uses magic.  Everyone, that is, except for Howard Lovecraft.  Lovecraft has too much integrity to resort to magic spells to solve his cases.

When Lovecraft is hired by the enigmatic millionaire, Amos Hacksaw (David Warner), to retrieve a book from a gangster (Clancy Brown), it seems like it should be an easy case.  However, nothing’s ever easy on the streets of L.A.  The book, it turns out, is the Necronomicon, the ancient tome that reportedly tells how to summon the Great Old Ones.  Lovecraft begins to suspect that Amos has plans the go beyond just getting his book back, plans that involve both his seductive wife (Alexandra Powers, made up to resemble Veronica Lake) and a singer named Connie Stone (Julianne Moore).

Based on the works of H.P. Lovecraft, Cast A Deadly Spell was produced for HBO in 1991.  The idea of mixing film noir with both hard-boiled satire and Lovecraft’s Cthulhu mythos works surprisingly well, largely due to a talented cast and Martin Campbell’s atmospheric direction.  Fred Ward is perfect as a hard-boiled private detective, delivering his lines with just the right mix of cynicism and wry humor.  He is ably matched by David Warner, who is his usual menacing self and Alexandra Powers.  I assume that this movie was one of Julianne Moore’s first roles and she brings a lot of playful humor to her role as an innocent who might not be so innocent.  Everything from the production design to the costuming (every outfit worn by both Moore and Powers is simply to die for) comes together to create an intriguing alternate world.

What really makes Cast A Deadly Spell work is the obvious love that the film has for its source material.  Unlike so many other Lovecraft adaptations (the majority of which reduce the Great Old Ones to being little more than cardboard monsters), Cast A Deadly Spell seems to share Lovecraft’s vision of a random universe that is dominated by beings that are often both ludicrous and deadly at the same time.  The film is full of little details that will be savored by fans of pulp fiction.  When Connie sings, she performs at the Dunwich Club.  When the police show up, they’re led by Detective Bradbury (Charles Hallahan).

Though the film does have its slow spots, Cast A Deadly Spell is an enjoyable mix of satire, film noir, and Lovecraft.  Keep an eye out for it because it will definitely cast a spell over you.