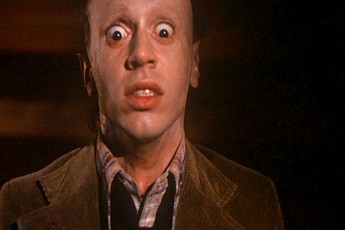 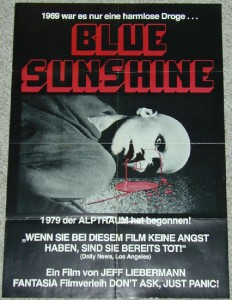 Occasionally, on twitter, I’ll take part in the Drive-In Mob live tweet session.  Every Thursday night, a group of exploitation, grindhouse, and horror film fans get together and watch the same film and, via twitter, provides their own running commentary track.  It’s always terrific fun and a good opportunity to discover some films that you might otherwise miss.  It was through the Drive-In Mob that I first discovered an obscure, low-budget cult classic from the 1970s, Blue Sunshine.

Blue Sunshine (directed by the underrated horror director Jeff Lieberman) opens in the late 1970s.  Across California, people are suddenly going bald and turning psychotic.  At a party, singer Frannie Scott (played by Richard Crystal) has a nervous breakdown when another reveler playfully pulls off his wig and reveals Frannie to be hairless.  Frannie responds by tossing half of the guests into the fireplace and then running out into the night.  He’s pursued by his best friend Jerry Zipkin (played by future director Zalman King) but when Frannie is accidentally killed while running away, Jerry finds himself accused of being a murderer.  Even as the police puruse him, Jerry starts his own investigation.  He quickly discovers that there’s an epidemic of bald people suddenly murdering those closest to them.  The one thing that these people have in common: they all attended Stanford University in the late 1960s and they all used a powerful form of LSD known as “blue sunshine.”  Now, ten years later, they’re all having the worst flashback imaginable.

Blue Sunshine is probably one of the best of the old grindhouse films, a film that embraces the conventions of both the horror and the political thriller genres while, at the same time, neatly subverting our expectations.  Director Jeff Lieberman emphasizes atmosphere over easy shocks and the film’s cast does a pretty good job of making us wonder who is normal and who has dropped the blue sunshine.  Wisely, Lieberman doesn’t resort to giving us any easy villians in this film.  Much like the best horror films, the monsters in Blue Sunshine are as much victims as victimizers.  I especially sympathized by one poor woman who was driven to rip off her wig by the sound of two particularly obnoxious children chanting, “We want Dr. Pepper!” over and over again.  Seriously, that’s enough to drive anyone crazy.

Blue Sunshine is one of those wonderfully odd little cult films that makes me thankful that I own a DVD player.  First released in 1978, Blue Sunshine mixes psychological horror with political conspiracy and the end result is an unusually intelligent B-movie that remains relevant even when seen today.  Blue Sunshine was originally released on DVD by Synapse Entertainment and it has since been re-released by the New Video Group.  I own the Synapse edition, which features a very entertaining director’s commentary with Jeff Lieberman as well as a bonus CD of the film’s haunting and atmospheric score. 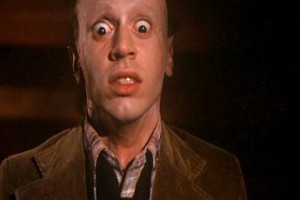