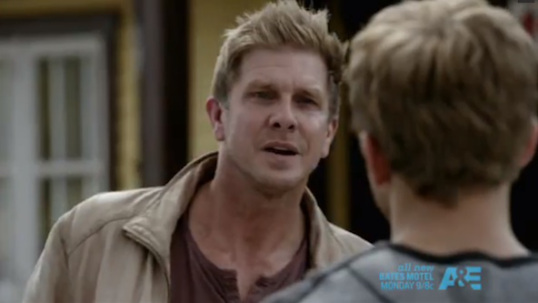 Regardless of whatever else may have happened on this week’s episode of Bates Motel, it will always be remembered as the episode where things got even ickier than before.

I’m talking, of course, about the revelation that Dylan’s (Max Thieriot) father also happens to be his uncle, Caleb (Kenny Johnson).  I have to admit that I wasn’t necessarily surprised by this.  In fact, when one thinks about the world that Bates Motel takes place in, there was really no way that Caleb wasn’t going to turn out to be Dylan’s father.  It explains why Norma wants nothing to do with her oldest son and Max Thieriot, Vera Farmiga, and Kenny Johnson all deserve a lot of credit for their performances tonight.

That said, I’m hoping that Caleb — much like Deputy Shelby and so many of the other sleazy men who have stopped off at the Motel — will not be around that much longer because, seriously, he is just so icky!  Bates Motel has a good track record for violently executing sexual predators and I expect that same fate is waiting for Caleb.

If nothing else, Bates Motel seems to be making a good case against men in general.  Is there a single man in Norma Bates’s life who isn’t a deviant of some sort?  Earlier in the episode — before we discovered that Caleb was Dylan’s father — Norma met a guy named George (Michael Vartan).  George seems like a really nice guy but, seeing as this is Bates Motel, I’m still expecting him to have somebody chained up in his basement.

Along with the arrival of Uncle Caleb and Norma meeting George, this week’s other major subplot was Emma (Olivia Cooke) attempting to throw a beachside memorial service for Bradley.  As I’ve stated in the past, Emma is my favorite character so I was happy to finally see her getting to do something.  The memorial service was neatly contrasted with the garden party that Norma attended.  And just as Norma met George, Norman got to know Cody (Paloma Kwiatkowski), who, now that Bradley is gone, is apparently going to be the latest obstacle keeping Emma and Norman from getting together.

Norman and Emma are an adorable couple but, ultimately, he is Norman Bates, isn’t he?