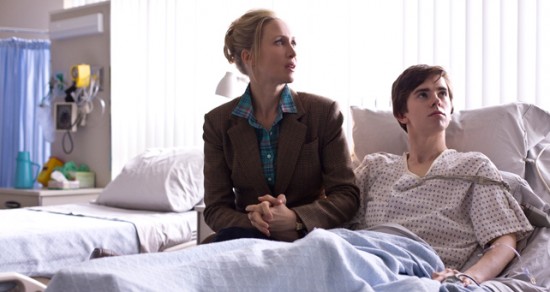 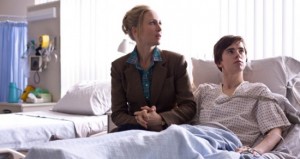 It’s a legitimate question because, as the saying goes, that boy ain’t right.  It’s also the question that gives Bates Motel its excuse for existing.

Still, even as we consider what’s wrong with Norman, we might want to ask what’s wrong with everyone else in White Pine Bay?  Seriously.  Last week’s episode ended with Norman (Freddie Highmore) and Emma (Olivia Cooke) being chased by pot farmers while some guy was being burned alive in the middle of the town square.  Meanwhile, Norman’s brother Dylan (Max Thierot) has found a new job working for the same pot farmers who were chasing his brother and, perhaps most disturbing of all, everyone in town seemed to be oddly excited about a logging festival.  And let’s not even start with the fact that everyone seems to exclusively watch black-and-white televisions or that the most popular student at the high school is a girl named Bradley…

Seriously, White Pine Bay is a weird town with an unwieldy name.

However, after spending the previous two weeks setting up its story, this week’s episode of Bates Motel focused on Norman.  Having managed to escape the pot farmers, Norman is back at school and being rude to Emma.  When Emma attempts to apologize for what happened and says that she really was just looking for an excuse to spend some time with him, Norman rather coldly suggests that maybe she should give the little faux-Manga booklet back to him because, after all, “it’s pornographic.”  I actually really liked this little scene.  Olivia Cooke and Freddie Highmore have a lot of chemistry and Cooke’s desperate attempt to explain herself was poignant while also hinting that Emma might have some secrets of her own.

(Seriously, I was pretty wild back in high school but I still would never would have thought that of searching for a sex slave as the perfect opportunity to flirt.)

Anyway, after that, Norman ends up in class trying to take a test.  However, instead of concentrating on the test, Norman keeps imagining the sight of his teacher (and, briefly, his mother) bound and gagged.  This leads to Norman fainting in the middle of class and being sent to the hospital where, along with watching one the town’s many black-and-white televisions, Norman also gets to cuddle with Bradley when she comes to visit him.

(Okay, technically, the TV may not have been a black-and-white set because Norman was watching an old movie.  However, I like to think of White Pine Bay as being a town where color television has been outlawed.)

Norman is eventually sprung from the hospital by Norma (Vera Farmiga) because Norma, as always, is having problems of her own.  Sheriff Romero (Nestor Carbonell) is convinced that Norma had something to do with the disappearance of Keith, the former owner of the motel.  (Romero’s right, of course.  Keith was murdered by Norma in the premiere episode.)  Deputy Shelby (Mike Vogel) informs Norma that he found Keith’s belt under Norman’s bed.  Shelby explains that he’s hidden the belt from Romero but it’s also pretty obvious that, unless Norma continues to do things like attend the local logging festival with him, Shelby might be tempted to let Romero know what he found.

After Norman finds out what his mother is doing and why, he ends up having another hallucination where Norma orders him to get that belt.  However, once Norman sneaks into Shelby’s house, he discovers that Shelby has a woman chained up in his basement…

The main complaint that I heard about the first two episodes of Bates Motel is that, storywise, they moved at too deliberate of a pace.  That was definitely not an issue with last night’s episode.  The episode moved at a good pace, Highmore’s sympathetic yet remote performance is developing nicely, and Vera Farmiga continues to kick ass with her cleverly over-the-top interpretation of Norma Bates.

Personally, I can’t wait to see what happens next.