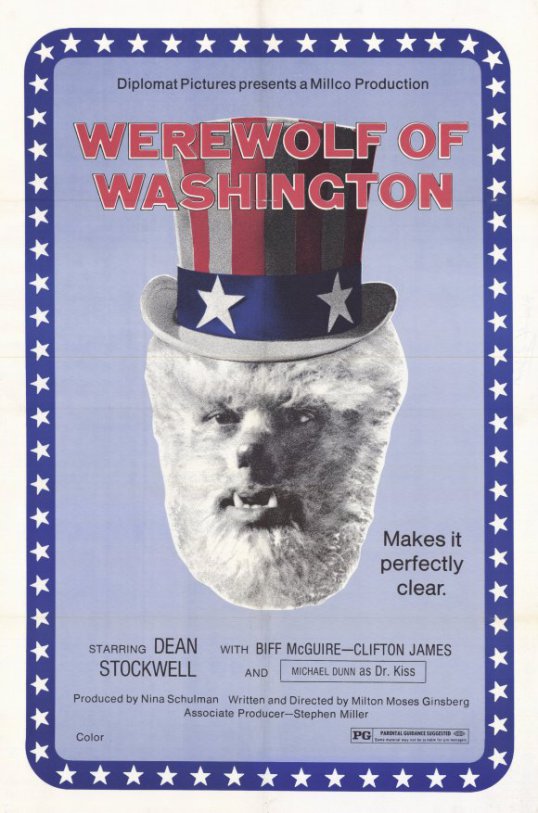 First released in 1973, The Werewolf of Washington is one of those obscure films that always seems to pop up in Mill Creek box sets.  That’s largely because Werewolf of Washington has slipped into the public domain and anyone can release and sell a copy of it.  (It’s also been uploaded to YouTube by a few hundred different users.)  It’s a film that I’ve actually watched quite a few times, largely because it is so easily available.

Which doesn’t necessarily mean that it’s any good.  I have to admit that, in between viewings, I always seem to convince myself that The Werewolf of Washington is a better film than it actually is.  The idea behind the film sounds clever.  The President’s press secretary (played by Dean Stockwell) is a werewolf.  When the full moon shines, he transforms and wrecks havoc on the streets on D.C.  Stockwell still wears his suit, even when he’s a wolfman.  The President (played by Biff McGuire) is a total idiot who spends a lot of time bowling.  The Attorney General (Clifton James) is a paranoid fascist who is quick to blame the werewolf’s murders on outside agitators.  For no particular reason, a dwarf mad scientist (Michael Dunn) shows up.

Yes, the idea is clever but the execution … actually, the execution is not terrible.  Dean Stockwell gives a good performance and there’s a funny scene where he starts to turn into a werewolf while bowling with the President.  Stockwell’s fingers swell up and get stuck in the bowling ball and Stockwell totally freaks out.  And then there’s a scene where the werewolf attacks a woman in a phone booth and it’s actually rather suspenseful and almost scary.  Plus, Biff McGuire is great and all too plausible as the vapid President.

And yet, overall, the film itself is never as good as you want it to be.  I think a large part of the problem is that the film opens with a long voice over from Dean Stockwell, which explains why his character ended up in Budapest (that would be where he gets bitten by the werewolf) and why the President subsequently named him press secretary.  It’s so much backstory that you get the feeling that the opening narration must have been added in post production in order to cover up scenes that either did not work or that the film’s director never got a chance to shoot.

And really, the entire film is like that.  The film is a collection of scenes that never really flow together or establish any sort of steady pace.  And, when it comes to both horror and comedy, pace is key.

The Werewolf of Washington is a clever idea.  I just wish the execution had been just as clever.

And I’ll probably continue to wish that the next time that I rewatch it.