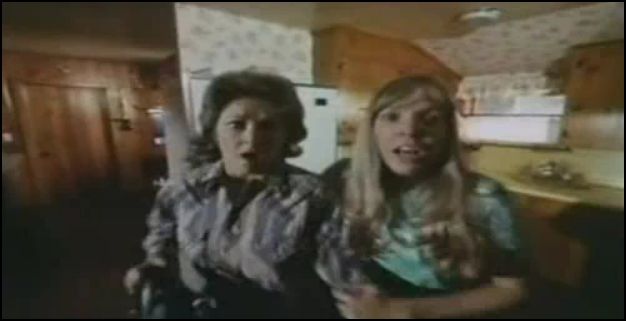 Michael Rhodes (played by Robert Stack) is just your average, every day tax attorney. He has a strong marriage to Christine (Vera Miles), a teenage daughter named Melissa (Margaret Willock), a best friend (Herb Edelman) who has far less hair than he does, and a dog that barks at strangers. It’s a good life but there’s one more thing that Michael wants.

He has always wanted a house out in the country, away from all the noise and distractions of the city. And now, he’s found one! It’s a really nice house, too. It’s tastefully decorated (or as tasteful as interior design could get in the early 70s) and it’s got both a pool and a sauna. It’s such a nice place that there’s even people who want to buy it from Michael before he’s even gotten the family moved in! In fact, there’s one potential buyer (played by Ted Gehring) who is really pushy about it. He claims to be a doctor but he just comes across as being strange and kind of desperate. I wonder what’s going on with that.

The house seems perfect but there is one big problem and it’s not the gopher who, in one scene, runs through the kitchen and scares the Hell out of Christine and Melissa.

No, the problem is that the house might be …. HAUNTED! Sometimes, the dog appears to bark at nothing. At night, there are ghostly wails in the distance. When Christine steps into the sauna, the door closes and somehow locks behind her. Is someone trying to play an elaborate trick on Michael and his family or have the Rhodes been targeted by the supernatural?

That’s the question at the heart of this short and effective movie from 1974. It was originally made for television, so the horror is pretty much limited to bumps in the night and shots the members of the family being watched and followed by the subjective camera. With those limitations in mind, director John Llewellyn Moxey still did a good job of creating a properly ominous atmosphere and the film is carefully constructed to keep you off-balance and guessing as to whether or not the house is really haunted or not.

The cast was full of familiar faces but all of them, especially Vera Miles, did a good job of selling the idea that 1) they were an actual family and 2) that they were genuinely frightened by what was happening in their house. The great character actor, L.Q. Jones, shows up as the local sheriff and he delivers his lines with just enough of a smug little smile that you’re never quite sure whether he’s skeptical about the house being haunted or if maybe he’s in on the whole thing.

(Interestingly, Jones would go on to direct the superficially similar horror film, Race With The Devil.)

The Strange and Deadly Occurrence is a nicely done and briskly paced little movie. It’s intriguing while you’re watching it and the ending, while hardly perfect, does manage to wrap up all of the plot threads. The film is currently available on YouTube, where it can be enjoyed by anyone looking for an atmospheric haunted house film.