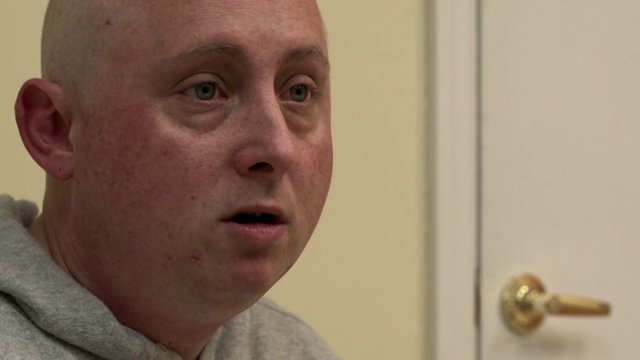 Michael Roberts is a man with problems.

He’s an unhappy man who, as the short film The Drifter begins, is stuck in a dying town.  He’s haunted by his abusive childhood. He’s tortured by memories and fears.  When he sleeps, he has nightmares that are as jarring and loud as Michael is deceptively low-key.  When he does leave town, he drifts.  He works at a farm.  He watches as strangers have conversations, a part of their world but yet separated from their existence.  He listens as people speak but their voices can barely be heard over his own inner demons.

And, as we discover by the end of this short film, Michael has his share of demons.

I would encourage everyone to go watch The Drifter right now.  It’s only 13 minutes long and it can be watched for free over on YouTube.  As directed by Scott Goldberg and performed by actor Robert Leckington, it’s a frightening journey into a disturbed man’s head.   Images of the snow slowly falling over Michael’s hometown and of a field that seems to stretch on forever suck us right into Michael’s disturbed worldview.  Goldberg captures some truly haunting images, some of which are reminicent of the best work of David Lynch.   When Goldberg’s camera zooms across the field and, in a close-up, reveals the darkness under the deceptive placidity of nature, it’s hard not to be reminded of Kyle MacLachlan finding that severed ear at the beginning of Blue Velvet.  When Michael records his confession, it’s reminicent of the way the characters in Lost Highway compulsively confessed and obsessively recorded themselves.  Even Leckington’s nightmares leave you feeling as unsettled as that glimpse of the unknown evil living behind that diner in Mulholland Drive.  Leckington plays Michael with an unsettling intensity that’s effective precisely because it feels so authentic.  The Drifter works because both the viewer and the filmmakers know that the world is full of real-life versions of Michael Roberts.

The Drifter is apparently a part of a larger, unfinished film called MOIRAI.  Again, I would encourage everyone to watch it on YouTube.  Click on the like button.  Leave comments of appreciation.  Pass the link on to all of the other horror fans in your life.  Let’s do everything we can to encourage the filmmakers to complete MOIRAI because, judging from The Drifter, it’ll be a film worth seeing!

The Drifter can be viewed here.