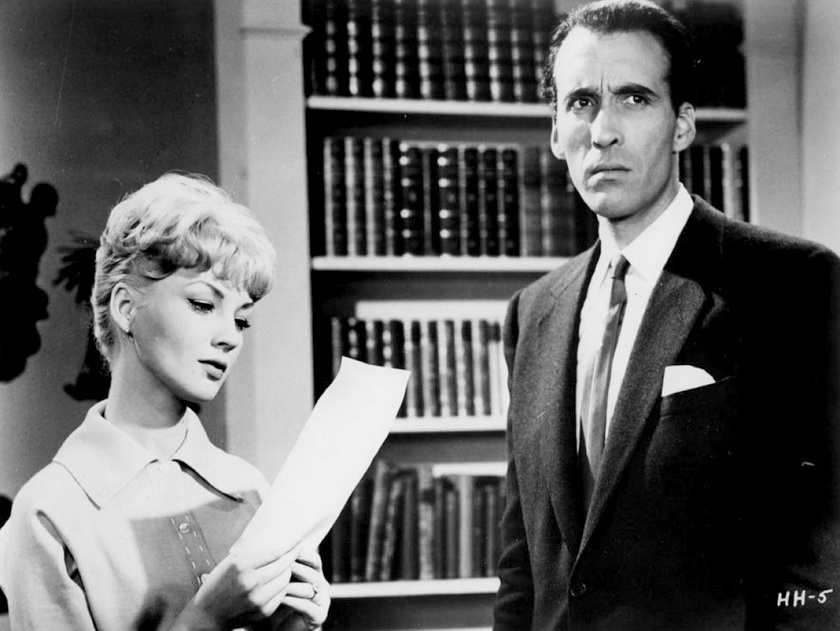 The City of the Dead, a 1960 horror film that is also known as Horror Hotel, takes place in the town of Whitewood, Massachusetts.

Like most small New England towns (or, at the very least, the type of small New England towns that show up in movies like this), Whitewood has been around forever. And it apparently has quite a history, especially where witches and devil worshipers are concerned! In the 17th century, a witch was burned at the stake. Rumor has it that, before she died, she sold her soul to the devil. As long as she arranges for two virgin sacrifices a year, the spirit of the witch can torment Whitewood for as long as she likes.

Fortunately, a virgin has just arrived in town! Nan Barlow (Venetia Stevenson) is doing a term paper on the history of witchcraft and her very helpful professor, Alan Driscoll (played by the man himself, Christopher Lee), suggested that maybe Nan should visit town and stay at the Raven’s Inn.

As soon as Nan arrives, it becomes obvious to her that there’s something strange about Whitewood. All of the people are so strange and secretive and the streets always seem to be covered in fog. As Nan starts to do her research, she discovers that it will soon be time for the first annual sacrifice. The sacrifice is meant to happen at “The Hour of 13.” What does that mean? Why not go into the basement of the inn and search for some clues….

When Nan never returns from Whitewood, her brother, Dick (Denis Lotis), teams up with her fiance, Bill (Tom Naylor), and they head up to town to investigate. Once Dick arrives in town, he meets Whitewood’s only seemingly normal inhabitant, Pat (Bella St. John). Pat, who had previously befriended Nan and is the daughter of the local (and apparently quite ineffectual) reverend, agrees to help them in their search. Of course, Pat is also apparently the only virgin left in Massachusetts and the time for the second sacrifice is approaching….

Though set in America, The City of the Dead was produced in the UK and features British actors, all of whom do a fairly good job of sounding like natives of New England. This deliberately paced film is a masterpiece of mood and menace. Director John Llewellyn Moxey emphasizes atmosphere over jump-scares and the black-and-white cinematography gives the entire film a gothic, dream-like feel. Though he’s not in the film as much as you might expect, Christopher Lee still makes the most of his scenes as Prof. Driscoll and the film’s fiery finale definitely makes an impression.

The City of the Dead is one of those films that, because it has fallen into the public domain, is very easy to find. (It seems to get included in every “50-DVD” box set released by Mill Creek.) It also plays frequently on TCM so keep an eye out for it!