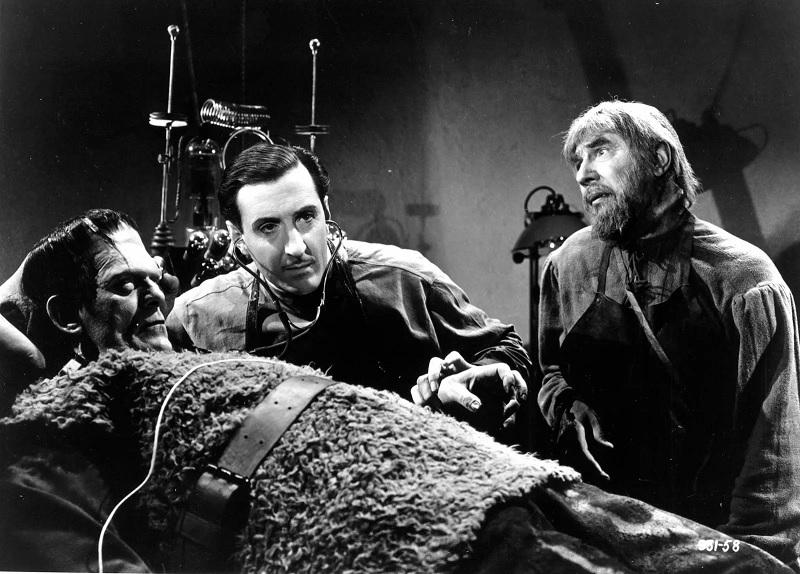 And, on top of all that, it’s also a pretty good movie, one that holds up as both a sequel and stand-alone work!

Son of Frankenstein opens decades after the end of Bride of Frankenstein.  (How many decades is open for debate.  I’ve read that the film is supposed to be taking place in 1901 but there’s a scene featuring a 1930s-style car.  Let’s just compromise and say that the film is taking place in 1901 but someone in the village owns a time machine.  I think that’s the most logical solution.)  Henry Frankenstein is long dead, but his name continues to strike fear in the heart of Germans everywhere.  Someone has even tagged his crypt with: “Heinrich von Frankenstein: Maker of Monsters.”

Needless to say, everyone in the old village is a little uneasy when Henry’s son, Wolf von Frankenstein (Basil Rathbone) shows up at the castle.  In fact, they’re so uneasy that the local constable, Krogh (Lionel Atwill), pays Wolf and his family a visit.  Krogh explains that, when he was a child, the Monster ripped his arm out “by the roots.”  AGCK!

(That said, that really doesn’t sound like the Frankenstein Monster that we all know and love, does it?  I suspect there’s more to the story than Krogh is letting on…)

Wolf explains that he has no plans to bring the Monster back to life.  He then sets out to do just that.  Wolf wants to redeem Henry’s reputation and the only way to do that is to prove that Henry was not misguided in his quest to play God.  Helping Wolf out is Ygor (Bela Lugosi).  Ygor is a former blacksmith who was due to be hanged but, because of a malfunction with the gallows, he just ended up with a disfigured neck.

As for the Monster, he no longer speaks.  Instead, he just angrily grunts and he kills.  Whatever kindness he developed during the previous film was obviously blown up with Elsa Lanchester at the end of Bride of Frankenstein.  On the one hand, it’s fun to see Karloff as the monster.  On the other hand, it’s impossible not to regret that he doesn’t get to do much other than stumble around, grunt, and strangle people.  There are only two scenes where Karloff gets to show any real emotion and, in both cases, he does such a great job that you can’t help but regret that the monster is such a one-dimensional character in Son of Frankenstein.

But no matter!  Regardless of how the film uses (or misuses) the Monster, it’s still an entertaining 1930s monster film.  Basil Rathbone does a great job as the imperious but ultimately kindly Wolf von Frankenstein.  And Bela Lugosi’s natural theatricality makes him the perfect choice for Ygor.  To be honest, I actually think Lugosi does a better job as Ygor than he did as Dracula.  I know that’s blasphemy to some but watch the two films side-by-side.  Lugosi is clearly more invested in the role of Ygor.  Considering that Lugosi reportedly felt that he was mistreated in Hollywood, it’s tempting to wonder if some of his own anger informed his performance as the perennially mistreated and bitter Ygor.

Son of Frankenstein closed out the Karloff Frankenstein trilogy.  When Frankenstein’s Monster made his next appearance, he would be played by the same actor who later took over the role of Dracula from Lugosi, Lon Chaney, Jr.

(And interestingly enough, Lugosi would subsequently take over the role of the Monster from Chaney.  But that’ll have to wait for a future review…) 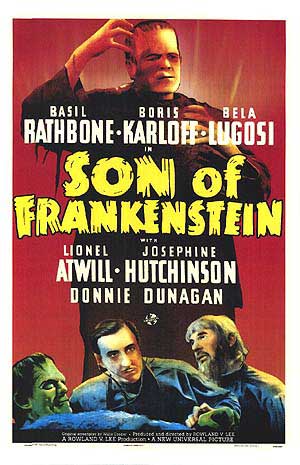