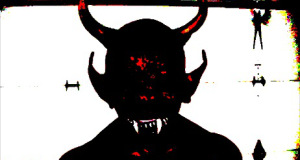 This weekend, I viewed a 20 minute short film called Satan’s Coming For You and wow, is it ever disturbing.

Incidentally, that’s not meant to be a complaint.  As someone who loves to watch (and review) horror movies and who has has been known to relax with a volume of true crime, one thing that always bothers me is that films about serial killers are never as disturbing as they should be.  As opposed to ghosts, zombies, and vampires, serial killers are everyday monsters.  They are the monsters who we know are currently out there stalking our streets.  They are the monsters that we could conceivably meet while taking a walk or running down to the store.  Serial killers are the monsters next door and, as a result, they are frightening on a whole different level from the spirits that populate movies like Insidious or The Conjuring.

And yet, far too often, the movies about these real-life monsters fail to really capture what makes them so scary in the first place.  If one looks at the history of real-life serial killers, it’s rare that you ever come across an elaborate motive, a tragic backstory, or the type of erudite wit that one associated with Hannibal Lecter.  Instead, for the most part, serial killers are the losers of society.  In real life, there are rarely any complex motives or pseudo-sympathetic personal histories.  In real life, most serial killers wouldn’t even be able to spell “Hannibal Lecter,” much less make a Lecter-style joke.  Serial killers kill because that’s what they do and that’s one reason why they are such terrifying figures.

Satan’s Coming For You captures that reality.  As a result, it’s not always a pleasant film to watch but it certainly sticks without afterward.  The two serial killers in question are Bubba (Matt Marshall) and his barely coherent friend Alister (Dakota Bailey, who also directed).  Neither one of them speaks in the educated tones of a Hannibal Lecter (though there are hints of cannibalism throughout the film).  Bubba yells at random people while driving his car (“Satan’s coming for you,” he shouts) and talks obsessively about how his now dead wife betrayed him.  When we first meet Alister, he’s killing a dog and then setting it on fire.  (Wisely, the filmmakers make sure to inform us that no real life harm came to the dog.  That doesn’t make the scene any less sickening but then again, shouldn’t a film about serial murder be sicking?)  They dig up Bubba’s wife.  They commit murders.  For the most part, Bubba rants and Alister listens.

At one point, Bubba and Alister both drop acid and end up seeing Satan himself.  It’s one of the best realized cinematic acid trips that I’ve ever seen, with Bailey making perfect use of sound and lighting to convince you that you actually have entered into Bubba and Alister’s twisted state of altered reality.  As well, since LSD is meant to reveal what is truly hiding inside your mind and your soul, it makes sense that Bubba and Alister’s trip would feature an appearance from the lord of darkness himself.  And I have to say that the film’s version of the devil is well-realized.  I jumped a little when he suddenly appeared, staring at me from my laptop.

For the most part, and with the notable exception of that acid trip, Bailey films in a documentary style, making good use of a handheld camera and harsh black-and-white cinematography.  And it’s pretty damn disturbing but then again, so are real-life serial killers.  Satan’s Coming For You was designed to get a reaction and to stick in the mind of the viewers and the film succeeds in doing just that.  It’s not always pleasant but it’s definitely something that you won’t forget any time soon.

You can view it here: https://m.youtube.com/watch?v=w-8ApYdx3tU