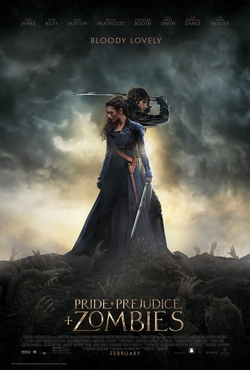 I had high hopes for Pride and Prejudice and Zombies, the just-released film which, like the novel upon which it is based, attempts to combine Jane Austen and The Walking Dead.  The source material was good.  The cast — with Lilly James as Elizabeth Bennet, Jack Huston as Wickham, and Matt Smith as Parson Collins — was impressive.  The trailers looked great, promising a combination of zombies, ornate costumes, and a very British sense of humor.  Sadly, however, the ultimate film is a bit of disappointment.

Actually, it’s more than just a bit of a disappointment.  It is a HUGE disappointment.  To have so much promise and then to turn out so bland — well, it’s enough to make you wonder if maybe zombies have become so common place in popular culture that they’re no longer as interesting as they once were.  Don’t get me wrong, as a symbol of the impossibility of escaping death, zombies are great nightmare fuel.  But, when you see them in a relatively bloodless PG-13 film like this, you realize that it takes more than just a few random zombies to make an effective horror film.

Plotwise, Pride and Prejudice and Zombies is exactly what it says it is.  It tells the same basic story as Pride and Prejudice, with the exception being that England is now under siege from zombies, the Bennet sisters have now been trained in how to kill zombies, Mr. Darcy (played by Sam Riley) is now Col. Darcy and he’s an expert at tracking down zombies and killing them, and Wickham is now more than just a cad, he’s a cad who wants to help the undead overthrow the living.  As I typed all that out, I realized I was probably making the film sound a lot more fun than it actually is.  And really, the movie should be fun but it’s not.

Director Burr Steers never manages to capture the proper tone for telling this story.  The satire is never as sharp as it needs to be.  The scenes that are meant to pay homage to Austen try a bit too hard to capture Austen’s style without contributing any of her insight and the romance between Elizabeth and Darcy is sabotaged by the fact that Sam Riley and Lilly James had absolutely no chemistry together.  The scenes with the zombies are bland, largely because this is a PG-13 rated film and bloodless zombies aren’t particularly scary.  A typical episode of The Walking Dead is more graphic than anything you’ll see in Pride and Prejudice and Zombies.

Which is not to say that there aren’t a few moments when Pride and Prejudice and Zombies kind of works.  It has moments but they’re isolated and they never really come together to build any sort of narrative momentum for the film as a whole.  Sam Riley is a bit of a dud as Darcy but Lilly James, Jack Huston, and especially Matt Smith all give good performance.  (Smith, in particular, is so good as Collins that I would like to see him play the role in an actual adaptation of Pride and Prejudice.)  Early on in the film, there’s a fun scene where the Bennet sisters destroy a horde of zombies and it actually strikes the right balance between comedy and horror.  Before that, we get the traditional scene that we get in all Austen adaptations, of the Bennet sisters preparing for a ball and, in between lacing up corsets and discussing whether they will all be able find husbands, they also carefully conceal the daggers and knives that they will be carrying just in case they happen to run into any of the undead.  It’s one of the few scenes that suggests what Pride and Prejudice and Zombies could have been if it had only found a consistent tone.

For that matter, I also liked the animated opening credits, which wittily explained how the zombies first appeared in England and, not surprisingly, suggested that it was all the fault of the French.  And the film also had a fairly effective scene that shows up in the middle of the end credits and suggested what would might happen if Pride and Prejudice and Zombies 2 is ever put into production.

But ultimately, even those moments that worked only left me frustrated that the rest of the film did not.  For all of its potential, Pride and Prejudice and Zombies disappoints.