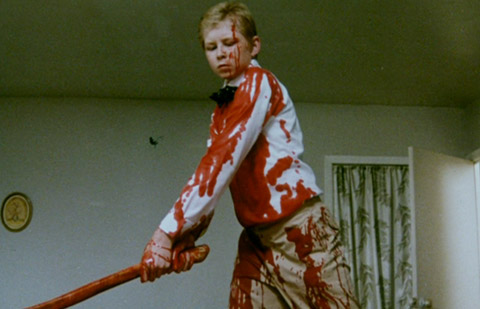 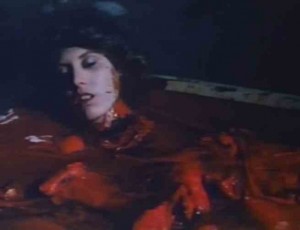 I have often read about a low-budget horror film that was released in the mid-70s.  The film was advertised as being “a film that could only have been made in South America … where life is cheap!”  The title of that film was Snuff and I’ve never seen it (nor do I have much desire to ever see it since I have been assured that it’s one of the most boring films ever made).  However, that little bit of advertising hyperbole has always stuck with me and whenever I see a particularly nasty exploitation or horror film, I always find myself saying, “They must have made this movie somewhere where life is cheap!”

This, of course, brings us to Nightmares in a Damaged Brain, an Italian film that was originally released in 1981, at the height of the slasher movie boom.  Nightmares is infamous as one of those gore-filled horror films that has achieved a certain amount of immortality by being banned in several different countries.  It’s only been within the past few years that Nightmares has been released on DVD in the U.S.  That DVD is supposedly the “uncut” version of the film but there are rumors of scenes so bloody and disturbing that they have still not seen the light of day.  Usually, it’s something of a let down to finally see a film as infamous as Nightmares in a Damaged Brain.  It’s rare that a film’s reality ever lives up to the rumors surrounding it.  However, having seen Nightmares in a Damaged Brain, I can truly say that, if nothing else, this film had to have been made in a place where life is cheap.

Nightmares in a Damaged Brain concerns itself with George (Baird Stafford), a violent inmate at a New York insane asylum who is given an experimental drug that seems to control his violent impulses.  He’s released from the hospital and, after spending some time wandering around some of the seediest sections of New York ever captured on film, he ends up at a sex club, writhing on the floor and foaming at the mouth.  Apparently, that drug’s not working as well as everyone thought…

Soon, George has stolen a car and he is relentlessly driving across the country.  George, it seems, is obsessed with a young boy who lives in Florida along with his loud, white trash family.  Along the way to Florida, George has several gore-filled nightmares (the majority of which feature him as a bowtie-wearing child, murdering two people with an axe) and kills a few random people as well.

While the film was released to take advantage of the early 80s slasher boom, director Romano Scavolini rejected many of the conventions of slasher genre.  Instead of emphasizing pretty teenagers and slick production numbers, Scavolini instead emphasized the sordid “reality” of the film’s rather trashy cast of characters.  There’s not a likable character to be found anywhere within this film nor is there a single scene that doesn’t feel as if it’s been drenched in sleaze.  An ominous atmosphere of impending, relentless doom hangs over every second of the film.  This doesn’t necessarily make for an enjoyable viewing experience but it is a film that, once you start watching, is difficult to look away from.

The film’s opening credits claim that the gore effects were done by the famous (and infamous) Tom Savini.  Savini has always denied having anything to do with the film and, at one point, threatened to sue the filmmakers to get his name removed from the credits.  Regardless of whether Savini did them or not, the film’s gore effects are memorable and rather disturbing.  (It also says something about this film’s reputation that even Tom Savini has disowned it.)

I had to take a shower after sitting through Nightmares In A Damaged Brain and I doubt I’ll ever watch it a second time.  Still, I’m glad that I did watch it because this brutally effective film is truly a part of horror film history.  If nothing else, I can now honestly say that I’ve seen a film that truly must have been made somewhere where life is cheap. 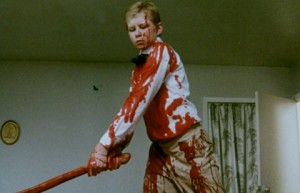